How to Increase Iron Absorption: The Complete Guide | Yuri Elkaim

How to Increase Iron Absorption: The Complete Guide 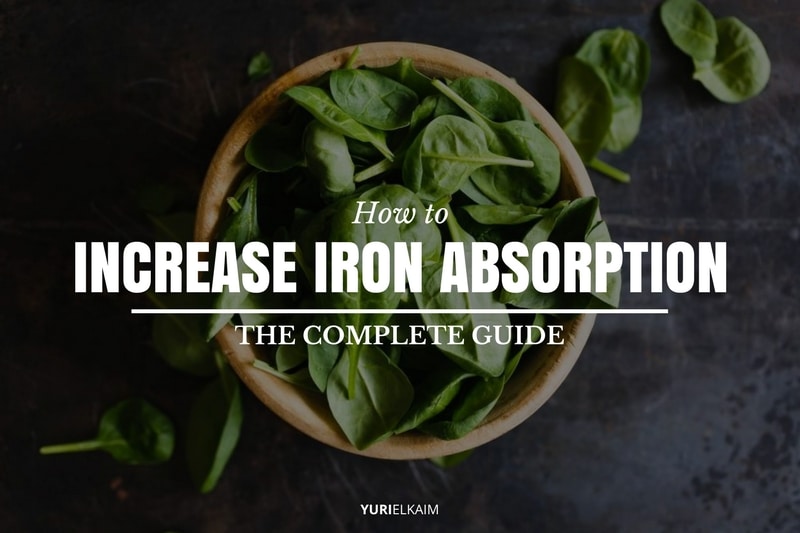 Are your cells starving for oxygen?

Your heart pumps blood through your body, delivering nutrients to cells and transporting oxygen from the lungs to all of your body’s tissues.

But do you know if your cells are actually getting enough oxygen? Because a lot of times they aren’t.

In fact, between 12 and 20 percent of women in North America simply aren’t getting enough … and their vitality is suffering because of it (1).

That’s because your cells need oxygen in order to produce energy for your body.

It’s the job of the hemoglobin – which resides in your red blood cells – to carry oxygen. Hemoglobin is made up of iron. In fact, about 70 percent of all of the iron in your body is found in your hemoglobin as well as the myoglobin, a type of cell that provides oxygen to the muscles (2).

Without enough iron, we can’t produce red blood cells, which means that oxygen can’t get distributed to the rest of our body.

A shortage of red blood cells leads to a condition known as iron-deficiency anemia, which can have a big impact on your health and how you feel.

Although there are several different types of anemia, iron-deficient anemia is the most common type worldwide (3).

Fortunately, there are a few different ways to increase iron absorption and prevent anemia.

In this comprehensive article, we’ll cover:

But before we get to all that, let’s go over the basics of iron deficiency.

As I mentioned earlier, a shortage of iron leads to iron-deficiency anemia, which causes low levels of red blood cells and hemoglobin.

The most common symptoms of iron deficiency include: 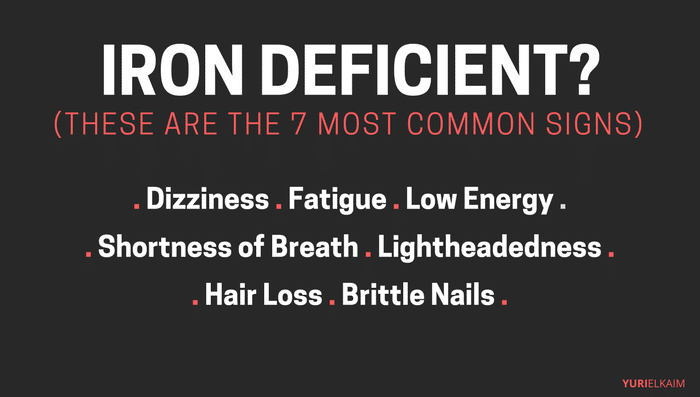 If left untreated, iron deficiency can also cause growth problems for infants and children, plus create a higher risk of premature birth in pregnant women (4).

Now it’s true that anyone can be affected by iron deficiency, but there are certain groups that have a higher risk.

There are two basic types of iron: heme and non-heme.

Non-heme iron is harder for your body to use (I explain why down below), and when foods have been fortified with iron it’s with the non-heme version.

Meanwhile, meat, seafood, and poultry also naturally contain some non-heme iron –  but they have another type of iron, known as heme iron, which your body absorbs more easily.

So as you can see, heme iron gives your body bang for your buck than non-heme iron.

Regardless of whether you have iron-deficiency anemia, you’re at risk for becoming deficient, or you’re just looking for ways to increase iron absorption, I’ve got you covered with all the info you need.

Now, let’s look at some factors that decrease your absorption.

What Decreases Iron Absorption (These 4 Things)

Boosting your iron absorption is important, but it’s also vital to reduce factors that might be getting in the way of how well your body is using iron in the first place.

In fact, many of the things that get in the way of iron absorption could be at the root of an iron deficiency.

Vegans and vegetarians, for example, often eat plenty of iron-rich foods – sometimes even more than meat-eaters. But as we noted above, plant-based sources of iron are often not absorbed as well, thanks to some of these factors that interfere with absorption.

Phytates are a type of antioxidant found in nuts, seeds, legumes, and whole grains. The problem is that they bind with iron and cause it to be excreted out of the body. Even small amounts of phytates in foods can cut down on iron absorption by up to 50 percent (5).

Luckily, you can counteract this effect, which I’ll get to in a bit.

While calcium is an essential mineral that your body needs to build strong bones and teeth, studies have shown it can actually interfere with iron absorption (6).

But don’t throw out your calcium-rich sardines and spinach just yet.

While there is some evidence that calcium can impair iron absorption, the evidence is conflicting. In fact, further research shows that our bodies are able to adapt over time and the relationship between calcium and iron is likely just short-term (7).

Polyphenols are a type of phytochemical found in a wide range of foods, from coffee to fruit. And some types of polyphenols can slash the absorption of iron by a whopping 90 percent (8).

So which foods should you be mindful of? These are some of the most common sources of polyphenols:

Note: Just because there’s some evidence that the polyphenols in these foods can decrease iron absorption doesn’t mean you should eliminate them from your diet. Below I have some strategies you can use to blunt their negative effects so you don’t have to completely cut them out.

Even though eggs contain iron, they also contain a type of phosphoprotein known as phosvitin, which can block absorption by up to 28 percent (9).

Now that we’ve gone over what might be getting in the way of your body absorbing the iron you are taking, let’s explore what you can do to increase iron absorption.

The good news is, just a few simple steps might be all you need.

If you pay a little bit of attention to when you eat certain foods, you can help boost iron absorption.

For instance, legumes, eggs, and high-calcium foods may get in the way of how well your body absorbs iron, but they also provide other important nutrients and shouldn’t be cut out of your diet.

A good tactic is to make sure you don’t eat those foods around the same time you are eating high-iron foods.

For example, eating a couple of hard-boiled eggs along with iron-rich steak might not be the best idea if you’re iron deficient. Instead, try eating them at separate meals. 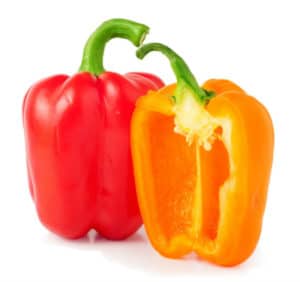 Pairing your iron-rich foods with vitamin C is another super effective way to increase absorption. One study even showed that adding vitamin C enhanced iron absorption by nearly 20 percent (10).

Not only does vitamin C help increase the absorption of iron, it also counteracts the effects of iron inhibitors like phytates and polyphenols, making non-heme iron much more absorbable (11).

Foods rich in vitamin C include most fruits and vegetables. Some of the best sources include:

Try topping off your iron-rich dinner with a fruit salad or enjoy a side dish of steamed broccoli or mixed greens with your high-iron meal to effectively boost absorption. 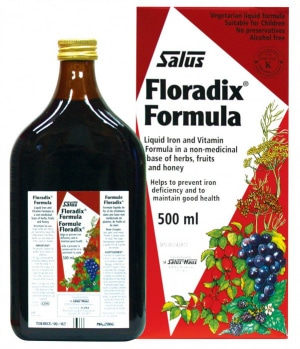 Taking an iron supplement is also an option if you’re iron deficient.

Iron pills are available over-the-counter and are often one of the first lines of defense for people with iron-deficiency anemia. They typically contain heme iron, which means they can be easily absorbed and are generally an effective treatment.

Note, however, that they sometimes come with a slew of bothersome side effects. Stomach pain, constipation, diarrhea, and nausea are just a few of the more common symptoms people experience after taking iron supplements.

If you do decide to start taking an iron supplement, it’s best absorbed on an empty stomach. Try to take it about an hour before meals or around two hours after meals to optimize your absorption.

Definitely check with a doctor or pharmacist for how much to take, but as a general rule of thumb, you should base your dosage on the current recommended dietary allowances for iron, which is 8 mg/day for men over 19 and women over 51. For women ages 19 to 50, that amount increases up to 18 mg/day, as this group is more prone to iron deficiency (12).

Iron injections are also available, but only given to those who can’t be treated using oral iron supplementation alone. Your doctor will determine how many doses are needed based on a number of different factors, like height, weight, and how well you respond to treatment.

These injections often come with the same potential side effects as oral iron supplements, plus itching, rashes, and skin reactions at the injection site. 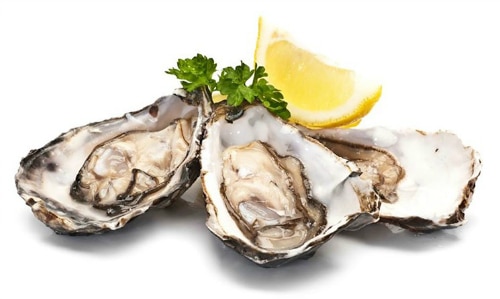 The easiest and lowest-impact way to increase your iron absorption is to add more iron into your diet.

As we discussed earlier, heme iron is more readily absorbable, but non-heme iron can also boost up your iron levels.

When talking about foods high in iron, it’s important to remember the difference between heme and non-heme sources of iron — heme is more readily absorbable by the body than non-heme iron and is found in meat, poultry, and seafood.

So even though lentils actually contain more milligrams of iron than sardines, the iron found in lentils won’t be absorbed as well as the iron in sardines.

The easiest solution is to add in some vitamin C to amp up absorption and help meet your needs. Balancing any of these iron-rich foods with a side of vitamin C-rich foods is a simple shortcut to boosting absorption.

Here are the top 15 sources of iron, plus how much iron you’ll find in just one serving:

Now that you know how to increase iron absorption, you can be sure to sidestep all the unpleasant side effects that come with iron deficiency.

A balanced and varied diet coupled with some iron-rich foods and enough vitamin C can keep your red blood cells healthy and happy.

Are You Tired of Feeling Tired?

Get my proven three-step formula to go from exhausted to energized in less than a week.

This formula has been put to the test by more than 26,237 formerly tired men and women. You can get this simple, effective blueprint – for FREE – by clicking the image below.

5 of the Most Effective Natural UTI Remedies