You are here: Home / Healthy Eating / How to Fix 9 of the Most Common Nutrient Deficiencies… Naturally

How to Fix 9 of the Most Common Nutrient Deficiencies… Naturally 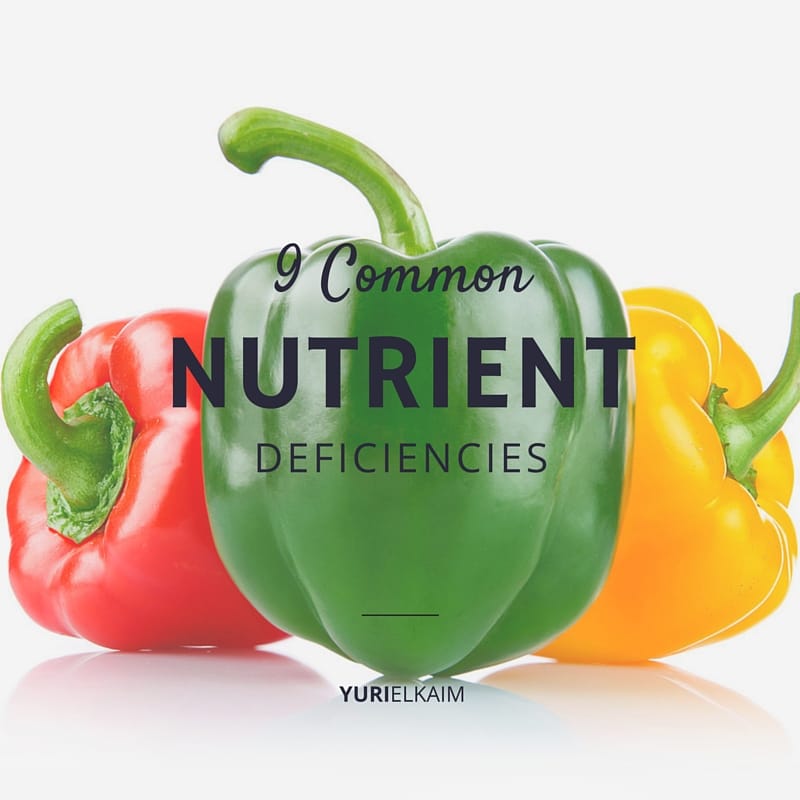 A report issued by the CDC in 2012, based on an 8 years survey, showed that 10% of the US population is suffering from some form of nutritional deficiency. (1)

Your first thought is probably to reflect on your own diet.

Sure, you may eat a sufficient amount of food, if not more than you need to, and you probably do get your share of fruits and vegetables, but there is a fair chance you’re not getting adequate nutrients.

In fact, there are all kinds of reasons why you might have one of these nutrient deficiencies: inadequate ingestion, absorption, or utilization and increased excretion or higher requirements are all potential causes.

Here are a couple symptoms of nutrient deficiency:

The worst part? The list is far from complete.

If you have been following me for a while you already know that I’m about prevention rather than correction. Being fit and healthy is simple if you’re armed with the proper knowledge. That’s what I’m here to provide.

The 9 Most Common Nutrient Deficiencies 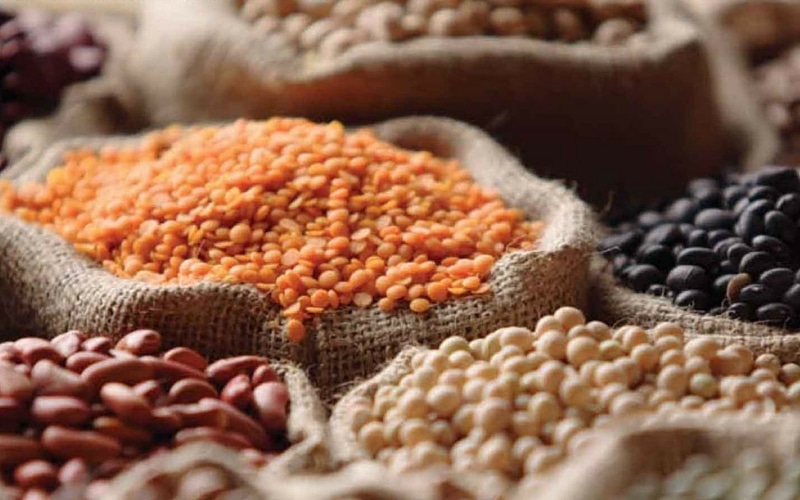 Iron deficiency is the most common nutrient deficiency worldwide and is far more frequent in women.

Iron is vital to key physiological processes such as oxygen transfer and energy metabolism.

While there are several causes for low levels of iron such as menstrual and digestive bleedings, malabsorbption, parasites and others, one of the main factors is inadequate intake.

So how do we handle or prevent iron deficiency?

Instead, go natural; boost your iron levels naturally by using spirulina as a supplement.

You can also spike up your iron levels by including diverse dietary sources in your daily meal.

Despite popular belief, there are other iron-rich foods out there beyond meat. Red meat and liver are certainly high in iron, but they are not the healthiest choice, as recent WHO recommendations show. (2)

Besides, it’s also a question of bioavailability. Meat-sourced heme-iron is better absorbed by the human body but here’s the thing: the iron found in meat is only 40% heme and we only absorb about 20-25% out of it! (3)

To soothe your sweet tooth go for berries. 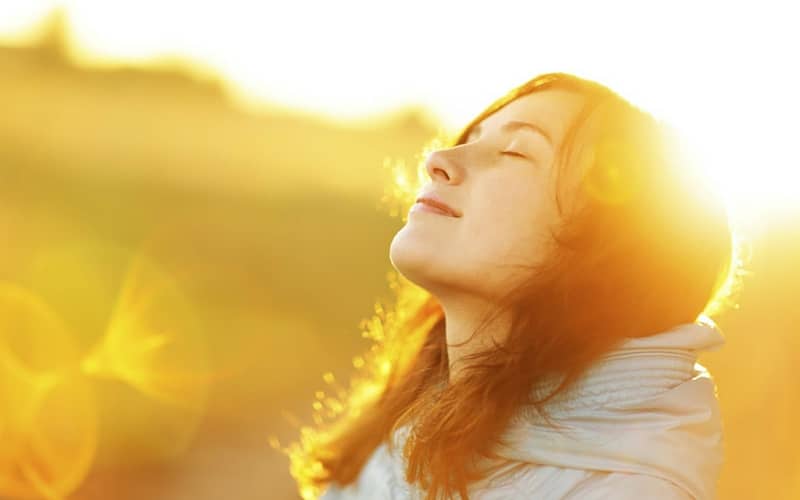 Vitamin D is responsible for enhancing the intestinal absorption of calcium and other minerals. Over 40% of the US population is has a vitamin D nutrient deficiency. (5)

In plain English, this means roughly 1 in 2 individuals!

In the human body, Vitamin D is synthesized in the skin under direct sunlight exposure and activated in the liver and kidneys.

Acquiring the required levels exclusively through diet is improbable because natural sources are scarce (fatty fish, some mushrooms, liver, eggs).

The increased percentage of individuals with vitamin D deficiency (also known as hypovitaminosis) can be explained in part by the growing popularity of sunscreen due to the causal correlation between sunlight exposure and skin cancer.

Prevalence is also influenced by skin pigmentation and climate, meaning that people with darker complexion and/or living in colder areas are the most prone.

How can we fight vitamin D nutrient deficiency? Oral supplementation is usually recommended but there is no consensus concerning dosages.

You also have to consider the fact that Vitamin D has side effects. If you do consider supplementation, choose natural D3 because D3 is up to 4 times more efficient than the alternatives.

So unless you are a pregnant woman, an infant or living where the sun barely shines, you may consider using another “medicine”…

While there are no specific guidelines on sun exposure, 10-15 minutes spent outdoors each day around noon should be enough.

Here’s a tip: if your shadow is “shorter” than you, it’s a good time for a short, sunscreen-free, sunbath. 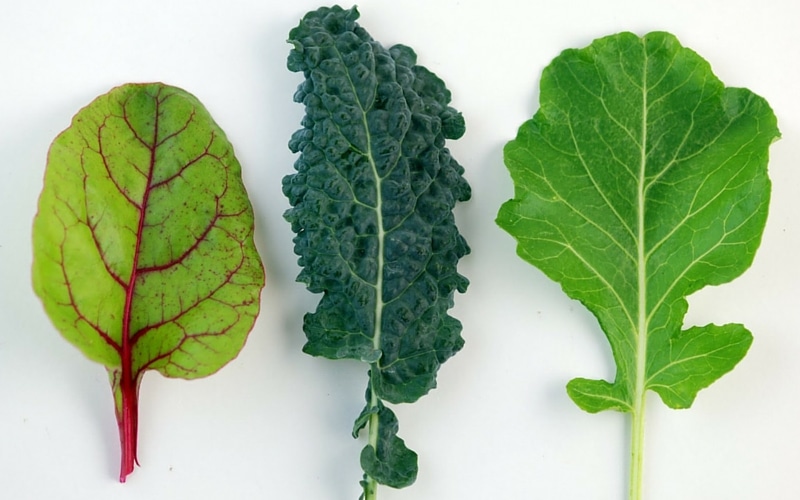 Calcium is a mineral vital to the human body. It’s involved in bone formation, muscular contractions, cardiovascular and neurovascular health.

The consequences of calcium deficiencies are dangerous. We all heard of osteoporosis, but did you know that hypocalcemia can induce heart problems such as arrhythmia, painful muscle contractions and even convulsions?

If you’re an otherwise healthy, active individual and your ionic calcium levels are low, most likely there are two probable causes: not enough calcium intake and not enough vitamin D (see hypovitaminosis D).

To make sure you provide your body with the proper calcium quantity, you should try to include calcium-rich foods in each meal.

Some of you may think: oh great, I’ll just eat more dairy. Unfortunately, that conclusion is the effect of milk industry lobbying and manipulation through advertising.

Even since the noted book The China Study was published, more scientific studies led by prestigious universities have confirmed its findings and shown that dairy consumption is harmful for our bodies and should be limited.

As I touch on in both of my books—The All-Day Energy Diet and the upcoming The All-Day Fat-Burning Diet—dairy does have calcium but it’s also linked to acidic pH, hormonal imbalance, various types of cancer, insulin resistance, hypocholesteremia and other diet-related conditions.

Simply put, dairy is no good.

Well, no good for humans that is. It’s perfect for baby cows!

I can only dream of the day when a “Got Broccoli?” commercial airs during the super bowl, as that’s a great source of calcium that needs more promotion. The same thing goes for greens, beans, almonds, brazil nuts, apricots and figs. 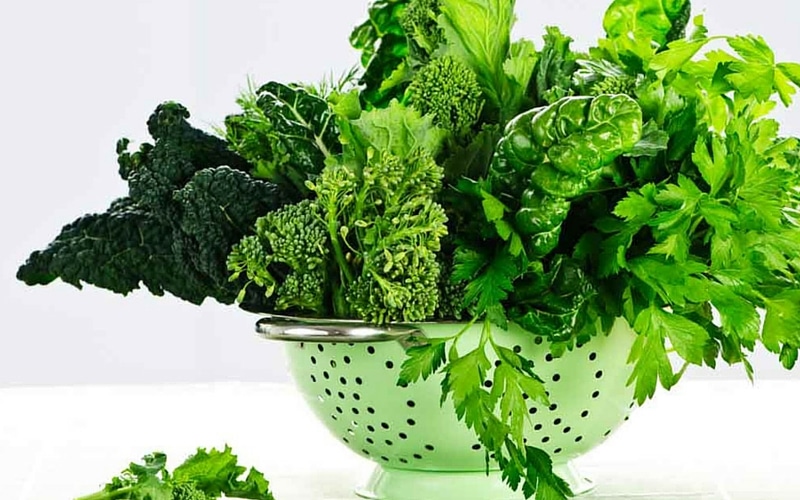 Magnesium is a major player in numerous metabolic reactions and is directly involved in controlling your electrolyte levels and cellular membrane channels.

I know that sounds complicated, but it essentially means that a magnesium nutrient deficiency can easily induce heartbeat anomalies, weakness, muscle cramps, irritability, insomnia and even depression.

According to USDA, more than 50% of the population does not meet the US RDA magnesium intake. (6)

In short, it’s very easy to mess with your magnesium levels.

To get more magnesium on your table and into your body, you can eat nuts, leafy greens and fruits.

[Try: 11 Green Smoothie Recipes That Will Rock Your Tastebuds] 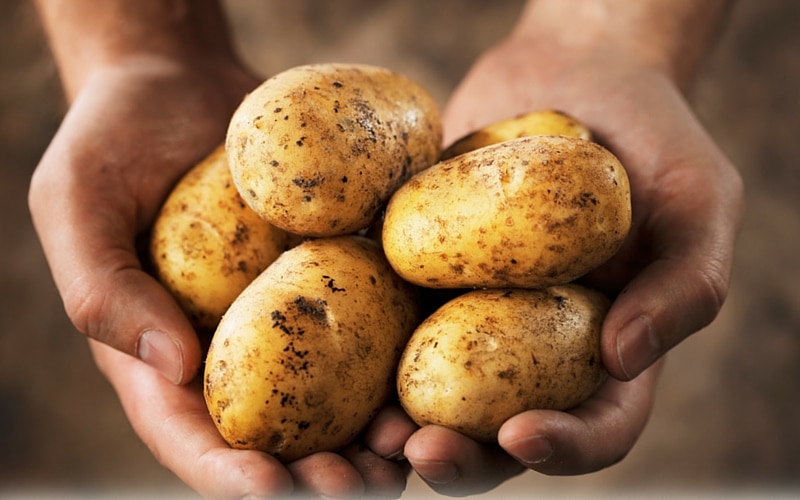 Hands down, B6 is one of the most important vitamins in the B spectrum.

It is involved in the metabolism of amino-acids, glucose, lipids, hemoglobin and even in gene expression. According to ARS, 1 in 4 Americans does not meet the RDA on vitamin B6. (7)

I hope you’re paying attention to these statistics I’m giving you. They paint a troubling picture: that far more people are struggling with nutrient deficiency than we might think.

Worse yet, they likely don’t even know it.

That’s especially the case with vitamin B6 deficiency, as it’s quite insidious.

Fatigue, nervousness, lack of energy and irritability are a few clues, because active vitamin B6 – scientifically called pyridoxal 5’-phosphate (PLP) –  is involved the production of several neurotransmitters.

It’s tempting to pick up a pill to deal with what you suspect might be a B6 nutrient deficiency, but if we were to take a supplement for every vital nutrient we needed, we would end up with a plateful of pills at every meal!

Here’s another concerning fact: little to no research has been done concerning the bioavailability of these supplements and the way they interact.

In fact, I’ll let this little fact speak for itself: too much vitamin B6 can cause peripheral neuropathy.

You know what’s easier and much safer than popping a pill? Eating right.

Good Natural Sources of Vitamin B6:

Potatoes, chicken and legumes are good sources of vitamin B6. Think about this: a single serving of hummus packs about 50% of the RDA. 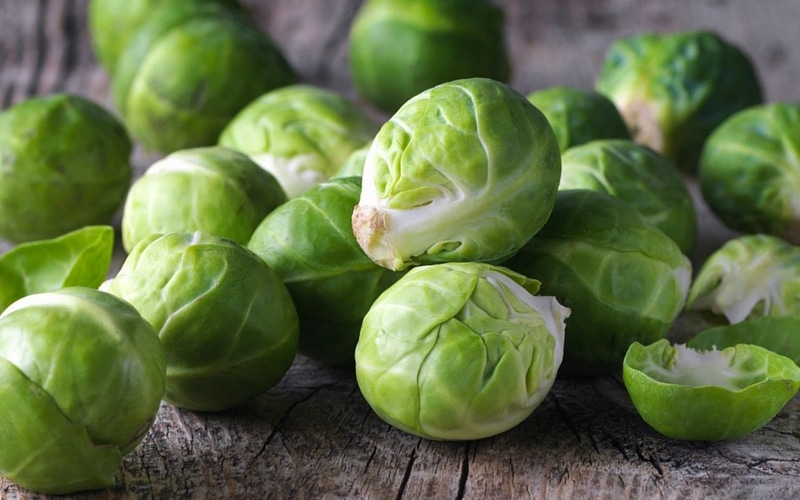 You might not know this, but folate is another member of the B complex family. It’s actually another name for vitamin B9.

Folate is involved in DNA synthesis meaning that it’s the handyman that deals with making, protecting, repairing the vital double helix.

In adults, the symptoms of a folate nutrient deficiency manifests similar to those of other conditions: weight loss, lack of energy, migraines, headaches, irritability and in severe cases, anemia.

Vitamin B9 is especially important for pregnant women, as a scientific correlation between folate levels and brain malformations in newborns has been established.

Breastfeeding women and infants are also risk categories. That’s why folate is of concern even though less than 1% of the US population is deficient and up to 19% are not meeting the recommended intake.

A great tip to maximize the folate content of your food is to steam it instead of boiling it. USDA research published in 2006 showed that steaming only reduces folate by 15% while boiling food reduces up to 35% of the vitamin B9 content. (8) 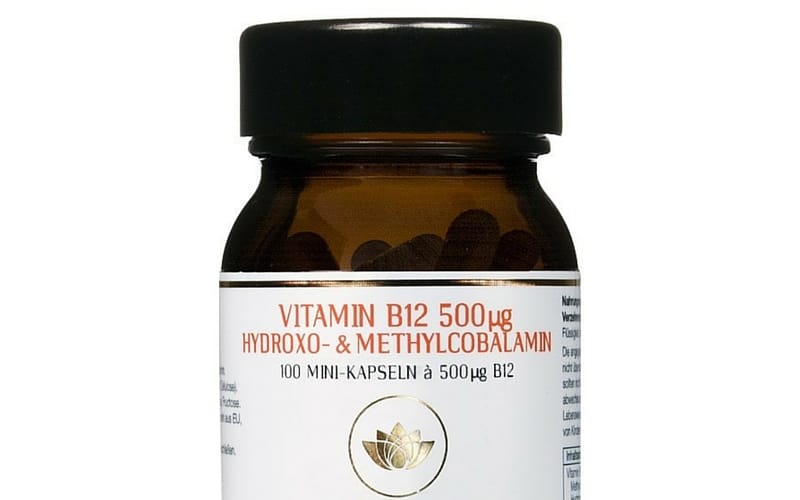 Just like its other B vitamin siblings, vitamin B12 is vital.

It’s a key player in the normal functioning of the brain, blood formation and DNA synthesis and regulation.

Because B12 is a vitamin that occurs in animal protein, it’s almost exclusively vegetarians, vegans and children (because of high demand and low intake) who are more exposed to a nutrient deficiency.

If you don’t consume animal products at all and you avoid processed foods (some are B12 fortified) you must seriously consider supplementation, even if you are not experiencing any symptoms.

Go for the good stuff: seek out methylcobalamin, which is the equivalent of the body’s B12 and is thus more easily absorbed and transported.

To all of you non-vegans and non-vegetarians, keep in mind that B12 deficiency is not exclusive to people who don’t eat animal products. We all need to pay attention on what’s on our plate. 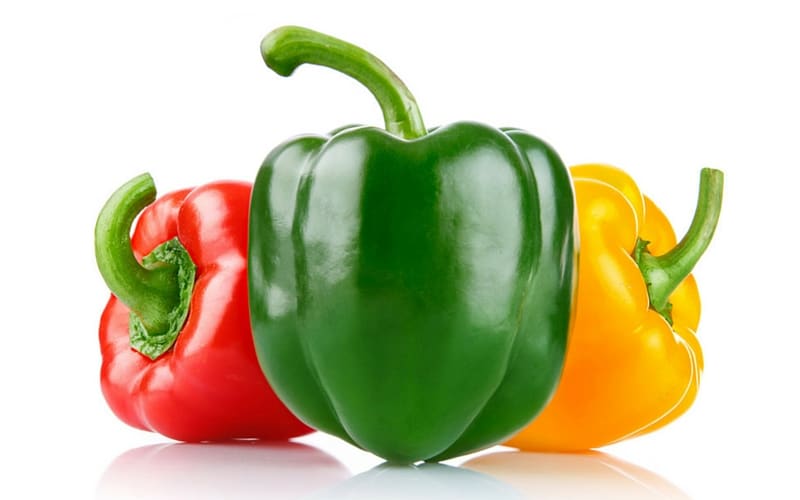 Recent statistics show that a mind-blowing 50% of people are not meeting the Vitamin C RDA. (9)

Here’s another shocker: the human body cannot produce its own vitamin C.

The humble vitamin C, aka ascorbic acid, is vital to collagen production. And despite all that TV commercials and glossy magazines tell you, collagen plays a major role in so much more than youthful looking skin.

The popular misconception is that vitamin C is mainly found in citrus, but it’s found in great amounts in other vegetables as well: bell peppers, broccoli, berries, kiwis are all great sources of vitamin C. 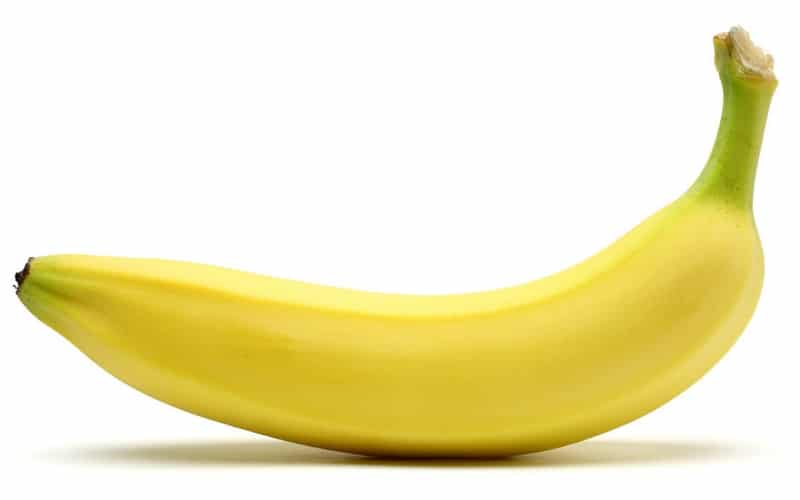 Last but not least, Potassium is of crucial importance to the proper functioning of all cells, tissue and organs in your body.

If you don’t have enough of it, you’ll find yourself stricken with a condition called hypokalemia.

Fortunately, lack of potassium is not frequent in healthy individuals and it mainly occurs in acute gastrointestinal problems such as vomiting or diarrhea, due to a poor diet or to low levels of magnesium (sees hypomagnesemia).

To make sure you’re getting enough of it, fill your kitchen with leafy green vegetables, tomatoes, citrus fruits, bananas, avocados, sweet potatoes, carrots, prunes and molasses.

How to Fix Nutrient Deficiencies

As I mentioned earlier, I hope you see a pattern here: many of the same foods contain a slew of the nutrients you need.

It’s not a coincidence; leafy greens, beans, fruits and vegetables should all be a major part of your diet if you wish to avoid nutrient deficiencies of any kind.

I hope this stands as a reminder that if you feed yourself well, your body will take good care of you. Who needs a hospital when you have a healthy kitchen!