Did You Know About These Negative Effects of Drinking Coffee? | Yuri Elkaim

Did You Know About These Negative Effects of Drinking Coffee?

Do you enjoy coffee? I do, too. That being said, I’m going to outline some things that might change your opinion.

Before I get going, I want to make it clear: I’m not saying you have to give up your coffee. However, I am suggesting that if you switch to decaffeinated coffee, you’ll be better off.

I know you might not want to hear this – but hang in there anyway! I’m going to explain to you why making a switch away from caffeine is so important, including some practical ideas for drinking and eating for energy.

Did you know an estimated 68 percent of Americans begin their days with coffee?

Why is that? Some people enjoy the taste, which is the category that I fall into. I don’t drink it all the time; maybe once or twice a week, and I do drink decaf when I do.

But most people rely on coffee because it wakes them up. They need that pick-me-up in the morning to feel like they can get through their day.

The weird thing is, coffee could actually be making it harder to power through your day. Let me show you why.

The Negative Effects of Drinking Coffee

If you’ve ever had a cup of coffee and then felt a little bit of a crash maybe an hour or two afterward, that’s because of what’s going on inside your body. 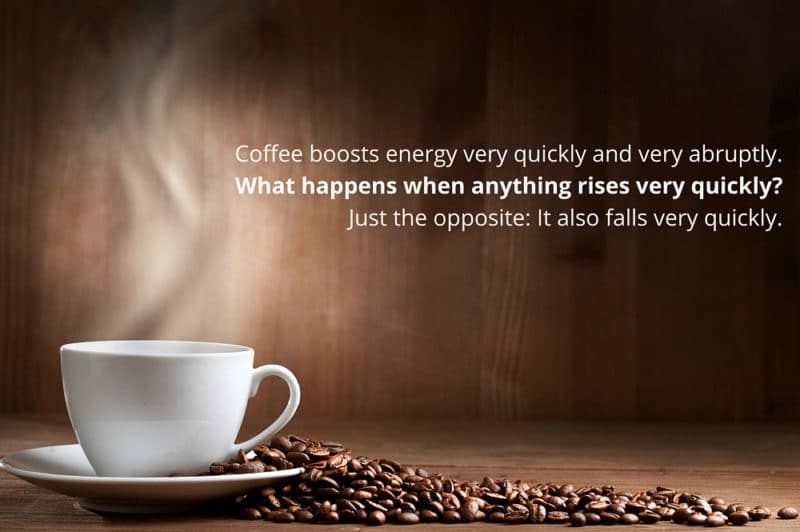 Let’s talk about specifically is going on with your blood sugar when you drink coffee. Once you understand the effects of blood sugar and insulin, everything else makes a lot of sense.

Let’s say you wake up in the morning and you feel a little bit groggy, so you brew a pot of coffee.  Whether or not you put sugar in it doesn’t matter; we’re going to focus on just the caffeine.

This is like your wakeup mode. You have a cup of coffee and all of a sudden, boom, your energy goes through the roof. You’re feeling great.

So you go to work and you feel productive for a while, but then something happens. Your energy starts to lag and you don’t feel so good.

Well, what do you do? Maybe you go for another coffee, maybe you go for a little pick-me-up of some kind, maybe some sugar, and that brings you back up again because of an increase in blood sugar.

And just as happened before, in a little while you’ll feel that crash again.

Here’s why you’re feeling the negative effects of coffee drinking.

First, let’s deal with any sugar you might be taking in along with the coffee. Insulin is secreted from your pancreas to take a lot of that sugar out of the blood, and, as a result, your blood sugar drops.

Second, you have two little glands the size of walnuts sitting on top of your kidneys called your adrenal glands. The fact they are so small is likely one of the reasons they get worn out fairly easily.

When you have a drink of caffeine – it could be a Red Bull, Monster, a cup of coffee, whatever –  they see that as a form of stress. Their job is to respond to stress. So when you drink caffeine, they will shoot out stress hormones into your bloodstream: cortisol and adrenaline.

With adrenaline, you feel pretty good – it’s like your body is saying, “That’s cool, we’re ready to go!”

The problem with adrenaline is that it goes to different stores in your body – glycogen in your muscles and fat cells in some cases – and breaks that down into individual glucose molecules, or individual sugar molecules, and then enters your bloodstream.

That’s where the problem begins because now you’re breaking down your energy reserves, which increases your blood sugar. The reason for that is because it’s preparing your body to fight or run away, using that sugar for immediate energy.

So you have this fast spike in blood sugar, but that only lasts for a little while because then the hormone insulin comes along and says, “Hey, we can’t have elevated sugar in the blood; it’s dangerous. We’ve got to get this stuff out of here.”

Insulin then takes the sugar out of the blood, causing an energy crash. Then you don’t feel so good, so you go for another cup of coffee or some more sugar and it goes up again.

This nonstop cycle – especially if you’re using stimulants like caffeine or sugar, or any type of stress, for that matter, if you’re stressed out about finances, work, whatever it is –  impacts your adrenal glands in the major way, no matter what kind of stress you’re feeling.

It’s as if you are on a roller coaster – caffeine and sugar are taking you on a ride throughout the day, up and down the energy ladder.

Stimulants Can Wear You Out

The problem is that, nowadays, most people seek energy through stimulation. The reason you’re so tired and not as energetic as you want to be is because your two little adrenal glands are worn out.

The more they’re called into action, the quicker they get worn out. 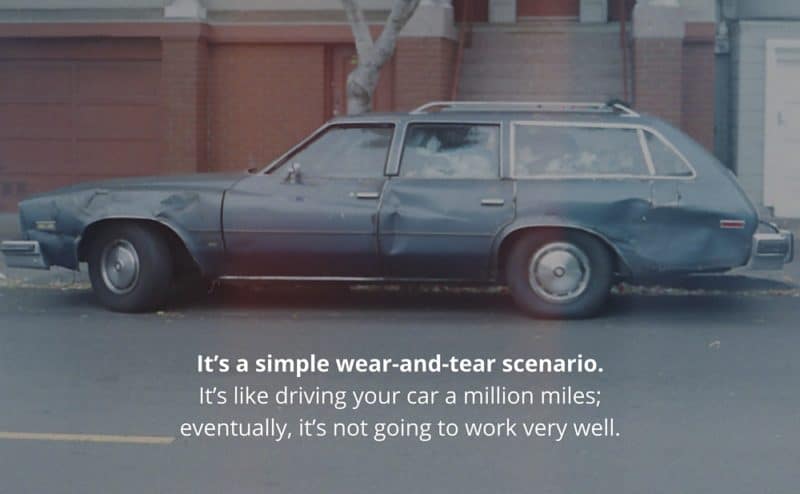 We want to reduce the amount of demand on these adrenals so they don’t have to pump out as much stress hormone as they normally do.

How do we do that?

I’ve talked about the importance of energy through tranquility. Doing things like silent meditation or just sitting in silence, gratitude journaling, visualization, deep breathing. These are all simple things you can do throughout the day at any point for a minute, or even less, that will reduce the stress coming in and reduce this whole cascade of events.

The other thing is that we need to look at substituting coffee – at least the caffeinated version – and get the caffeine out of your system.

Here’s the thing: Caffeine is the number one drug in the Western world. The problem with drugs is that you need more of them to get that initial impact.

The first time you had coffee, you probably felt a little bit jittery; then, the more you drank coffee, you stopped feeling like that, and that’s because your body adapted.

The more you use it, the more you need in order to feel the same effect. You’re not going to feel that great for the first couple days if you move away from caffeine, it’s true.

But I will also tell you the flip side of things is way better than anything you’ve ever felt while drinking caffeine.

Try to switch to decaf, try to drink more water.  Water is an amazing energizer; it’s actually really important for our bodies.

You also can change your beverages to gain more energy.

Things like green juices, green smoothies, or any kind of greens drink where you’re naturally getting in great nutrition will help your blood improve its overall health. It will allow the oxygen in your body to get where it needs to go to produce the energy you need and not rely so much on coffee.

We all want more energy, so we turn to caffeine. Caffeine gives us that initial quick jolt, and then we feel like crap.

Caffeine is not the savior you’ve been told it is.

And you’re going to see some studies where some people say coffee’s been shown to reduce colon cancer and other diseases or ailments, and that’s true.

There are some studies that do show that, but I can tell you that the negative effects of a lifetime of coffee probably outweigh the benefits, because you can get a lot of those same benefits by eating more plant-based foods, by getting some more green juices in, and overall living a better, healthy lifestyle.

Hopefully this has got the wheels turning in your head. Hopefully it serves you. Let’s cut out the caffeine, and bring in the energy-producing nutrients.

Are you ready to ease the caffeine out of your life and bring in more energy?

Check out my guide to making the perfect green smoothie – every time. You’ll get a basic guide to a great blend, and guidelines for making your own delicious combos! Click the banner to download now – FOR FREE!

25 Powerful Yin Yoga Sequences We Love (And Why)

The Research-Backed Guide to the Top Benefits of Taking Turmeric