I know some of you clicked on this headline all set to tar and feather me. Don’t worry, I haven’t gone crazy!

That said, what I stated above is indeed true: following a carb backloading diet, whereby you eat carbs, in this case, pancakes, for dinner can actually help you lose weight.

It sounds absurd, but if you’ve been struggling to lose weight to no avail, ask yourself this: has any of the conventional fitness wisdom been of much help to me? Furthermore, is it possible that some of that “wisdom” is faulty?

Let’s take a look at why carb backloading should be a part of your fat burning diet, and just why an occasional pancake dinner isn’t such a bad thing.

Why You Shouldn’t Eat Pancakes for Breakfast 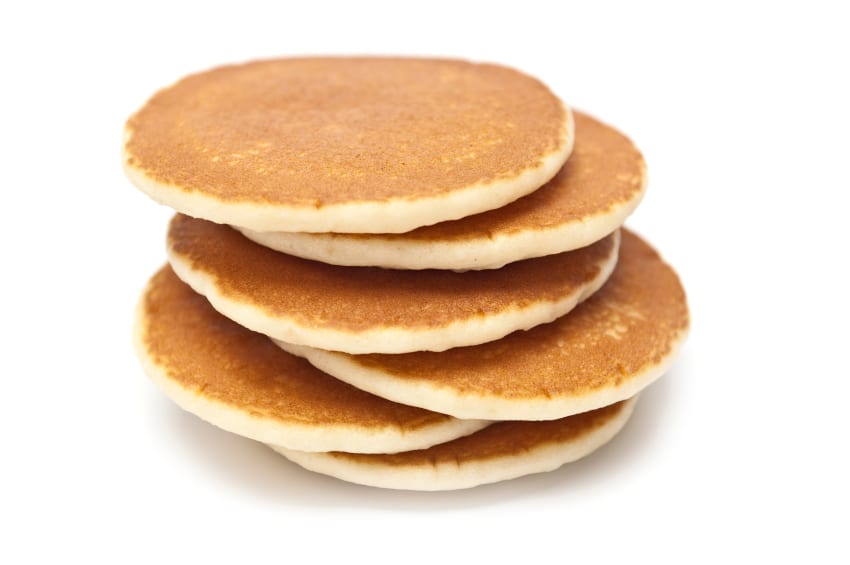 Eating starchy foods for breakfast is a North American cultural norm, but that doesn’t mean it’s a good thing.

When we eat a heavy carbohydrate meal for breakfast—think bagels, muffins, french toast, and of course, pancakes—those carbohydrates get broken down into sugar, which then spikes our blood sugar.

This does two things: it releases insulin into your bloodstream which can potentially be stored as fat, but it also blunts your body’s cortisol response, which is naturally high in the morning so you’re alert for the day ahead.

That’s what happens normally, but here’s the thing…

If we’re eating a carbohydrate-rich breakfast, then our blood sugar is already high.

This sends a signal to your cortisol to “chill out,” and that’s where you start to really mess up your natural sleep cycle, also known as circadian rhythm.

This also effects your melatonin levels.

You may have heard of melatonin as the sleep-inducing hormone or neurotransmitter, making it essentially the opposite of cortisol: low in the morning, high at night.

When it gets dark, your cortisol should decrease while your melatonin goes up and tells your brain it’s sleepy time.

Those morning pancakes can throw this off as well, making it hard for you to get a good night’s sleep.

What to eat for breakfast instead? Read this for starters.

Why Pancakes for Dinner are Good for You 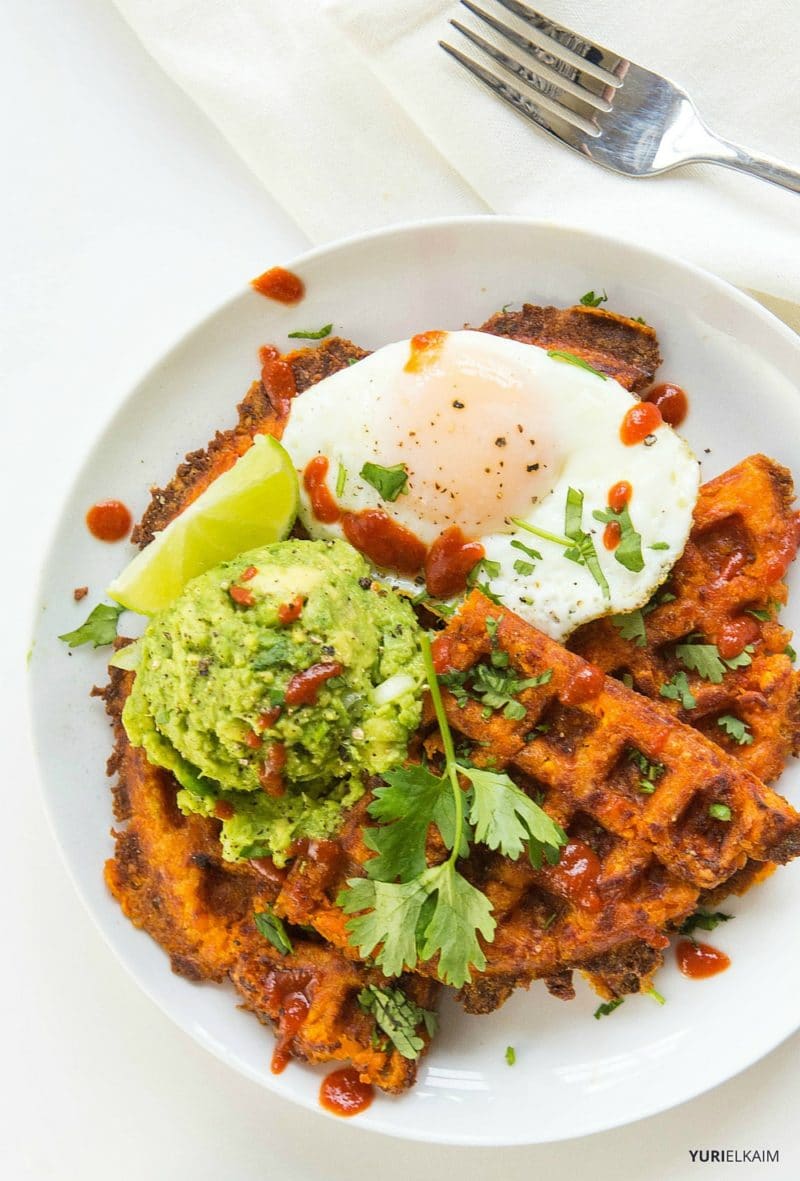 So let’s consider the alternative for a second; what happens if you have pancakes for dinner and steak for breakfast? (If you’re vegan, substitute your favorite protein here. Or try my breakfast bowl or this healthy breakfast… especially if you have kids.)

By having protein in the morning, you’re not going to spike your blood sugar the way carbohydrates would, so you don’t experience the sluggishness that comes with a blunted cortisol response.

Ideally, you’ll have the normal cortisol curve, and your circadian rhythm stays as it should.

Eating protein in the morning also stabilizes your blood sugar, keeps you full longer, and it doesn’t make you feel like you’re starving within a half hour.

You can experience all of these benefits by adding about 20 grams of protein to your breakfast plate.

Maybe that comes in the form of a protein-packed vegan smoothie or simply a smoothie with a scoop of plant-based protein powder added in. Your call.

If you’re having pancakes for dinner—and let’s be smart about this; you should be having healthy, high-fiber, gluten-free pancakes without too much syrup (like these 3-ingredient sweet potato pancakes)—you’ll be blunting your cortisol response and favoring melatonin’s natural curve. As a result, you’ll sleep a lot easier that night.

Have you ever passed out after Thanksgiving dinner, sleeping the most dead-to-the-world sleep you’ve slept in months?

You’ll also find quite a bit of it in carbs.

Tryptophan is a precursor to melatonin, and it’s much more influenced by carbohydrate consumption than even a second (or third) helping of turkey at Thanksgiving.

When you eat carbs, they heighten your blood sugar which in turn creates an increase of insulin.

This process shuttles a lot of that sugar into your muscles, and with that goes a lot of amino acids, which are the building blocks for the protein in your muscles.

A lot of those amino acids end up in your muscles, which ends up leaving a lot of free tryptophan circulating around the blood.

The cool thing is that the free tryptophan is now able to pass the blood-brain barrier. It gets converted into serotonin, which is a relaxing neurotransmitter. That serotonin is then converted into melatonin and, thus, we’re able to sleep much more effectively.

What the heck does this have to do with weight loss? 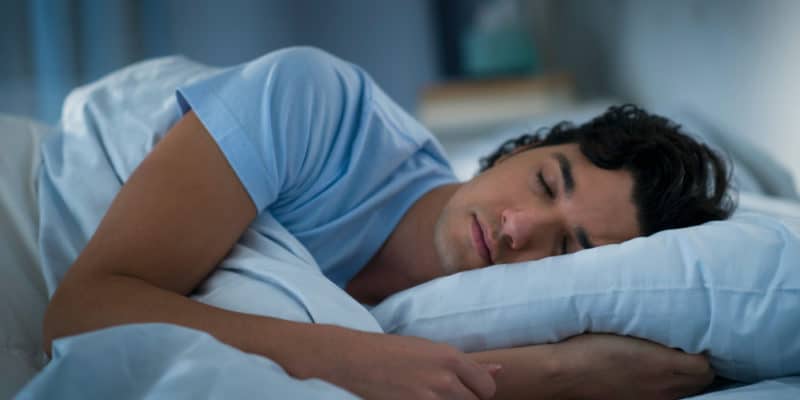 So pancakes at night essentially help you sleep better, but how does that affect weight loss?

Sleep actually has a significant impact on your ability to lose weight, as we examined in a recent article on the sleep and weight loss relationship.

Here, I want to highlight a study that illustrates this. It was called the Québec Sleep Study.

The study was performed in a community of several hundred people, and looked at how long people slept on average.

The researchers determined that people who slept an average of seven to nine hours were their baseline, and those who averaged five to six hours per night were “low sleepers.”

Over six years, the researchers found that those sleeping only five to six hours per night gained an average of 4.3 more pounds than the normal sleepers.

That’s not a lot of weight, but that’s not even considering what you might be doing exercise-wise or dietary-wise. Those pounds gained while you’re sleeping could exacerbate anything you gain while you’re asleep.

It may seem silly at first, but in addition to helping you sleep, having pancakes for dinner also helps you break out of the harmful eating conventions dictated to you by major food companies that are more interested in their bottom line than your health.

If pancakes—and carb backloading in general, which I’ll discuss in a minute—serve you better at dinnertime, then why shouldn’t you eat them then?

Is it because General Mills or Nestle say so? That’s nonsense.

You’ve probably heard that eating carbs later in the day is going to pack on the weight, but that’s simply not true.

It really doesn’t matter if you have five meals or two meals during the day, as long as the total calorie count is the same.

By simply shifting the number of carbohydrates you eat from the earlier part of the day to the later part of the day, also known as carb backloading, you’ll sleep better, and you’ll also have an easier time losing weight.

You’re essentially resetting your body to its factory settings.

What I’m suggesting to you is this: break away from the thinking that you have to do whatever everyone else is doing, because if you’re looking to lose weight, then obviously something you’re doing is not working.

Techniques such as carb backloading get a bad rap because they go against popular fitness fads that so many of us try to keep up with and never have success with. Why follow them?

Your current habits are messing with your circadian rhythm and your hormones, so why keep them?

If you want to lose weight and need my guidance, I strongly encourage you to pick up my latest book called The All-Day Fat-Burning Diet. I wrote this book to help you reset your metabolism to lose up to five pounds per week using my proprietary five-day food-cycling formula.

By following the simple diet—which includes these carb backloading principles—and exercise program I’ve laid out for you, you’ll steer your body back into its natural rhythms, which will help you feel and look the best you have in years.

What this means is that some days, you simply won’t feel like eating a lot of food.

Other days, you’ll want to feast, and that’s totally fine.

With this plan, you’re able to do that, and it will actually speed up your weight loss.

Best of all, it will get you accustomed to sustainable, manageable weight loss which doesn’t require you to kill yourself in the gym, count calories, or deprive yourself of food that you love.

Whether you’re looking to lose your first 50 pounds or your last 10, this book is the potential solution for you.

I’ve led hundreds and hundreds of people through this program to fitness success, and now I’m ready to share it with the world. Grab it here.

When to workout when carb backloading?

There’s a general principle here, and it’s that getting your workout in before your biggest carb meal is a good idea. Thus, early to late afternoon is fine, but it’s really not that big of a deal if you prefer to workout in the morning.

Who is carb backloading for?

Anyone who cares about their health since it naturally jives with your body’s hormonal/circadian rhythms.

What carbs to eat when carb backloading?

Any healthy carbs will do. Specifically, fibrous vegetables, legumes, fruit, and non-glutenous (if desired).