You are here: Home / Healthy Eating / The 8 Worst Breakfast Foods to Eat in the Morning

The 8 Worst Breakfast Foods to Eat in the Morning 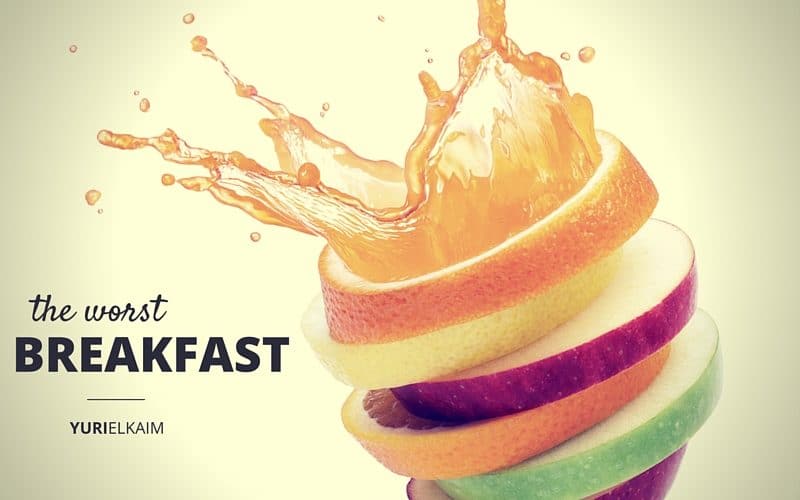 What did you have for breakfast this morning? So many of us believe that it’s the most important meal of the day, but don’t give much thought to what breakfast foods we’re eating.

That really has to stop.

Here’s one of the best nutrition tips I’ll ever give you: eating breakfast foods with poor nutritional value set you up for a failure of a day.

On the other hand, a healthy breakfast can fuel you for the day ahead by boosting your metabolism, filling you with energy, and kicking any harmful cravings to the curb. What’s more, all of this helps you stave off the onset of chronic disease. (1)

Unfortunately, the endless rush of our modern lifestyle means that many of us either skip breakfast or stuff ourselves full of grab-n-go crap for the sake of convenience.

You may save a few minutes by eating breakfast in the car on your way to work, but you’re setting yourself up for all kinds of health problems.

Here’s a list of the breakfast foods you should be avoiding at all costs.

Donuts are addictive little sugar-bombs that are entirely too easy to eat. They’re practically made for you to binge distractedly whether you’re driving your car or working at your desk.

Make no mistake, they’re simply one of the worst breakfast foods around.

One donut contains about 300-550 calories and it’s jam-packed (sometimes literally) with 30 grams or more of refined sugars.

As such, this small piece of junk food can give you an insulin spike that makes your blood sugar levels surge through the roof.

This FREE cheat sheet will be instantly sent to the email address you submit above. We hate SPAM and will not share your email address with anyone.

The resulting blood sugar crash is not pretty, and it’s exactly why, if you’ve had a donut for breakfast, you’re ready for a nap by 11am.

In the long term, this roller coaster sugar surge can create seriously detrimental metabolic conditions. It overworks your pancreas to counteract your high blood sugar levels and the body’s inability to store more glucose because your glucose stores are already full.

This can lead to insulin resistance and long-term chronic illness. (2)

Eating for energy should be your focus, so fight your inner Homer Simpson and ditch the donuts!

Sausage biscuits are nothing but delivery mechanisms for saturated fat, trans fatty acids and salt. They are seriously no good.

The high sodium chloride in the processed sausage meat can make your blood pressure rise. This can lead to hypertension and this condition is associated to a whole host of chronic diseases such as strokes and heart attacks.

[Related Article: The 2 Stinkiest, Yet Most Powerful Ways to Lower Blood Pressure Naturally]

In addition, the nitrates and nitrites in processed meats have been recently been linked to certain cancers. (2)

You might already know that I’m no advocate of coffee. Caffeine is dangerous stuff, and dosing yourself with it every day is a recipe for disaster.

I know I’m not going to convince everybody not to drink coffee, but I can highlight how bad it is—and how you’re making it even worse by using non-dairy creamer.

While I celebrate anyone’s decision not to consume dairy (it’s unhealthy and we humans really shouldn’t be drinking another creature’s milk), you should know that non-dairy creamer is pretty bad stuff itself.

Many of the companies that make these flavored non-dairy creamers tend to swap the saturated fats for hydrogenated oils such as trans fatty acids, plus they add refined sugars and artificial sweeteners. Increased consumption of trans fatty acids can lead to a surge in heart attacks, strokes and low density lipoprotein cholesterol blood levels. (3)

One of the biggest problems with trans fatty is that they are used as building blocks for hormones, as replacement for saturated fats. They are less stable and this is a big catalyst for hormonal imbalances which can lead to all kinds of health problems.

Don’t even get me started on just how bad the refined sugars are. Many of these beverages are packed with more sugar than a bowl of fruit loops.

For example, a 16 oz mocha has 8 teaspoons of sugar. This sugary start to the day can lead to heightened mid-morning crashes.

Instead of reaching for a coffee with non-dairy creamer in it (or any coffee, really) how about you try a peppermint tea with almond milk instead? There are so many caffeine-free teas you can try; let one of them provide you with that warm, satisfying cup of goodness you’re need each morning.

Who can blame children for wanting those colorful boxes of cereal that line the supermarket shelves?

The cartoon mascots on so many of these boxes promise breakfasts filled with fun and delight, but what’s really hiding in those cereal bits are blasts of hyperactivity.

This isn’t just my opinion. The FDA has made a connection between the dyes within these nasty cereals and hyperactivity. (8) In fact, these dyes are so bad that they were recently banned from all foods by the European Union.

You should do the same thing; if you read the label of a breakfast cereal box and can’t pronounce any of the ingredients, then ban it from your breakfast table!

The bagel is the donut’s heftier cousin. Once laden with cream cheese or margarine, it becomes a surefire way to increase the inflammation in your body.

Cream cheese is severely calorie dense, and margarine is packed with trans fatty acids. Most bagels are serious gluten bombs, so you’ll also be gumming up your digestion if you eat them.

I’m sure there are all kinds of alternative bagels and cream cheeses to be found at health food stores these days, but I wouldn’t recommend those either, and chances are that’s not what you’re going to be eating anyway.

If they pop up at the next office breakfast, stay far away, no matter how tempting they are.

I know most fruit juices—whether store bought or juiced at home—may seem like one of the healthiest things you can consume first thing in the morning, but they’re a lot sneakier than you think.

Although many of them are low in calories and rich in a variety of antioxidants and vitamins, they’re also low in healthy, filling fibers and are often packed with more natural sugars than soda! (3)

This essentially means that one or two glasses of fruit juice can contribute to a mid-morning sugar crash just as a donut might. A study from the BMJ even suggested that there was a link between drinking fruit juice and type 2 diabetes. (4)

A top tip is to eat whole fruit at breakfast. That way, you’re mitigating the effects of the sugar you’re eating with a substantial intake of good, healthy fiber.

Eat This Instead: 11 Green Smoothie Recipes That Will Rock Your Tastebuds

We talked about how colorful kids cereals are secretly bad for you, but did you know that those supposedly healthy cereals for adults can often be just as bad?

A study from Harvard University reported that whole grain claims on cereal boxes may be disguising the facts that the food is actually high in refined sugar, sodium and empty calories. (5)

The other thing you have to consider is that these cereals almost always contain gluten, which you definitely don’t want to eat at any time of day.

If you simply must have a cereal for breakfast, give one of my healthy breakfast bowls a try.

Waffles, white bread and muffins are very popular breakfast choices that are super tasty, but are also high in one terrible ingredient: white flour.

Eat This Instead: Chocolate Chip Protein Muffins via Simply Taylor

You might be wondering what you can eat if all of these commonly eaten breakfast foods are bad for you. I have a good answer for that, and science has my back.

Research has indicated that an egg or protein based breakfast can burn up to 65% more calories and belly fat when compared to a carb-rich breakfast of the same calorie content. (5)

That’s right; not only do breakfast foods not have to be fattening, they can even be a major part of your fat burning diet!

The author of the study postulated that carb rich breakfasts only provided half as much satiety as their protein rich counterparts, which made it harder for the dieters to stick to their weight loss goals. (5)

Eat This Instead: BLT Breakfast Salad With Soft Boiled Eggs & Avocado via So Let’s Hang Out

This should convince you that most of the breakfast foods you eat every morning really aren’t good for you. Junk those harmful breakfast foods and give the good stuff a try!