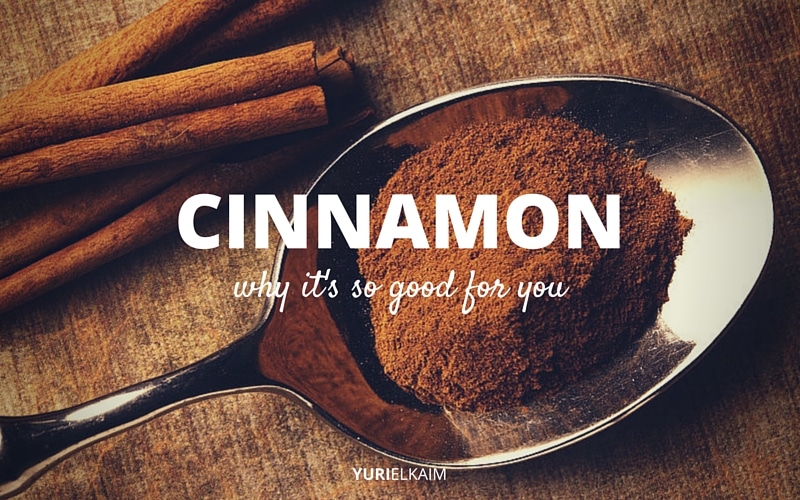 Cinnamon is such a pleasing spice. The mere smell of it conjures up warm, comforting feelings, and for many, is reminiscent of the holidays. What’s even better is that there are substantial ways that cinnamon benefits your health.

I’m sure you don’t think of this spice as an ultimate superfood, but once you discover all about what it has to offer, you’ll rethink that. Here’s a rundown of 11 amazing cinnamon benefits and the true impact this spice can have on your health and well-being.

How Cinnamon Benefits Your Health

Cinnamon is created from the bark of the ‘cinnamomum’ tree. This bark is stripped down and allowed to dry. It then curls up into rolls that we know as cinnamon sticks. In ancient times this was regarded as a rare and valuable food that was only fit for royalty.

It’s now a common food that is relatively cheap and is sold across supermarkets all over the world. It is also found in many foods and recipes. However, did you know that there are actually two different types of cinnamon? They are:

The aroma and taste of cinnamon is caused by the oily element termed cinnamaldehyde. This active compound is the catalyst for many of the potent ways cinnamon benefits your health.

Numerous studies have identified that cinnamon has properties that can help individuals who are insulin resistant. (1) Insulin is a hormone that is essential for regulating your metabolism and for the transport of blood sugars from your bloodstream.

For this reason, many type 2 diabetics consume cinnamon to help to control fluctuations in their blood sugar levels. Unfortunately not all cinnamon is made equally in terms of the health benefits associated with them.

Ceylon cinnamon (true cinnamon) is more popular when compared to cassia cinnamon due to the lower amounts of coumarin that it contains. One study has shown that in high doses, this compound can increase liver toxicity which can in turn lead to liver damage. (2)

The effective dose of cinnamon in blood sugar regulation is typically 2-4 grams of cinnamon per day.

Cinnamon benefits the process of gastric emptying, which is the speed at which digested food leaves your stomach. This in turn blunts the sharp rise of blood sugar after you have eaten and this improves the effectiveness of insulin within the body. (2)

Another study at the University of Georgia discovered that cinnamon can stop tissue damage and inflammation which is associated with high blood sugar levels. (3)

When blood sugars are high, the sugars bond with proteins to produce advanced glycation end products or AGEs. AGEs are really bad news as they can cause inflammation and tissue damage which is associated with aging and metabolic diseases. In the same study it was discovered that there was a strong link between cinnamon and blocking the formation of AGEs due to their high antioxidant content.

[Avoid These 5 Foods if You Want Clear Skin]

What does all of this mean? Essentially, that cinnamon can help you fend off the terrible disease diabetes.

Let me debunk an unfortunate fitness myth which is gaining an unfortunate amount of popularity: there is no magic bullet for weight loss and cinnamon will not melt away your body fat.

The best way to lose weight is to moderately engage in smart, effective exercise and switch to a diet of healthy nutritious foods that are not packed with ingredients you can’t pronounce.

It’s really that simple. That said, cinnamon can help.

While there are no current studies relating how cinnamon benefits weight loss, we have seen how the spice can aid in regulating blood sugar levels which then helps you control your appetite by decreasing the amount of glucose entering into your bloodstream.

In addition, cinnamon does make you feel fuller for longer and it helps with the proper digestion of foods. Fundamentally healthy foods that are digested properly enable the body to have its quota of essential nutrients and this should help with combatting over eating.

[How to Improve Your Digestion Power (8 Essential Steps)]

Cinnamon’s main role in counteracting IBS is to kill bacteria and to heal infections in the GI tract; thus allowing your digestive system to function more effectively. A top tip is to drink 2 cups of cinnamon tea per day to help alleviate pain associated with IBS.

Scientists at Wheeling Jesuit University observed a cohort of subjects completing a number of cognitive tasks whilst chewing no gum, plain gum and flavoured gum with cinnamon, peppermint and jasmine. (5) The cinnamon group had the best scores in the following areas:

If the tiny amount of cinnamon in a stick of gum can have that effect, imagine what a slightly larger dose of quality cinnamon can do?

Antioxidants protect the body by combating the oxidative change caused by free radicals. Cinnamon is packed with antioxidants such as polyphenols and it is one of the top seven anti-oxidant rich foods in the world. (6) (7)

This study found that cinnamon had the highest amount of antioxidant properties when compared against 26 other spices and even beat superfoods such as garlic and oregano to the crown.

This is excellent news as foods that are high in antioxidants are good for your whole body thanks to their ability to repair cells damaged by a multitude of factors such as aging.

[7 Anti-Aging Foods Everyone Over 40 Should Eat]

8. May Reduce Risk of Heart Disease

Cinnamon has been linked to a reduction in the silent killer of heart disease.

In a recent study, there was strong evidence to suggest that 1 gram of cinnamon had a positive impact on blood markers associated with cardiovascular disease. (1)

Cardiovascular disease is multifactorial in nature; however by accumulatively lowering total cholesterol, LDL cholesterol and blood triglycerides you will dramatically reduce the risk of this dreaded disease.

In a study from the Penn State, researchers found that a diet rich in spices such as cinnamon helped to counteract the negative effects of eating a fatty meal. Eating meals that are high in certain fats can cause your blood triglycerides to rise.

The research indicated that the subjects who ate spices such as cinnamon had a 30% reduction in triglyceride levels and a 13% increase in antioxidants levels. (8) This is good news in the fight against heart disease.

9. May Be Protective Against Cancers

Cinnamon has been widely researched for its use against prevention and treatment of certain cancers. A recent study discovered that sugar may be causing or sustaining cancer cells. (9)

Therefore cinnamon may have a positive impact by controlling the blood sugars in your body. It was noted that the active agent cinnamaldehyde was a potent cancer fighter by starving the cells of sugar that are needed for the cancer to survive.

10. May Have a Positive Impact on Neurodegenerative Diseases

Neurodegenerative diseases are primarily attributed to the progressive loss of brain structure and this can lead to a loss in brain function. There is a whole host of neurodegenerative diseases and two common types are Alzheimer’s and Parkinson’s disease. There are two compounds found in cinnamon that block the build-up of tau in the brain, which is a catalyst and marker for Alzheimer’s disease.

In terms of Parkinson’s disease, a study looking at mice discovered that cinnamon helped to protect neurons, stabilize neurotransmitter levels and boost motor function. However more human research is required within this area.

The Cinnamaldehyde compound within cinnamon may help to combat all kinds of infections within the body.

Cinnamon benefits your immunity and overall health by blocking the development of various bacteria which include listeria and salmonella. In addition, there is evidence to suggest that the antimicrobial effects of cinnamon can help to counteract gum disease and bad breath.

I imagine some or all of these amazing cinnamon benefits might be a bit surprising to you. It’s yet another example of how the food we eat can and should be a means through which we heal ourselves.

Thankfully, with delicious and amazing spices like cinnamon, we can satisfy our taste buds (see below) while we’re looking after ourselves!

Here Are Some of My Favorite Cinnamon Recipes on the Blog: