What does it look like to lose two pounds a week for six weeks straight, while eating only real food? I’m excited to show you progress from All-Day Fat Burning Diet beta test participant, Deborah S. She joined us for our second 21-day beta test and made massive progress toward her weight loss goals. 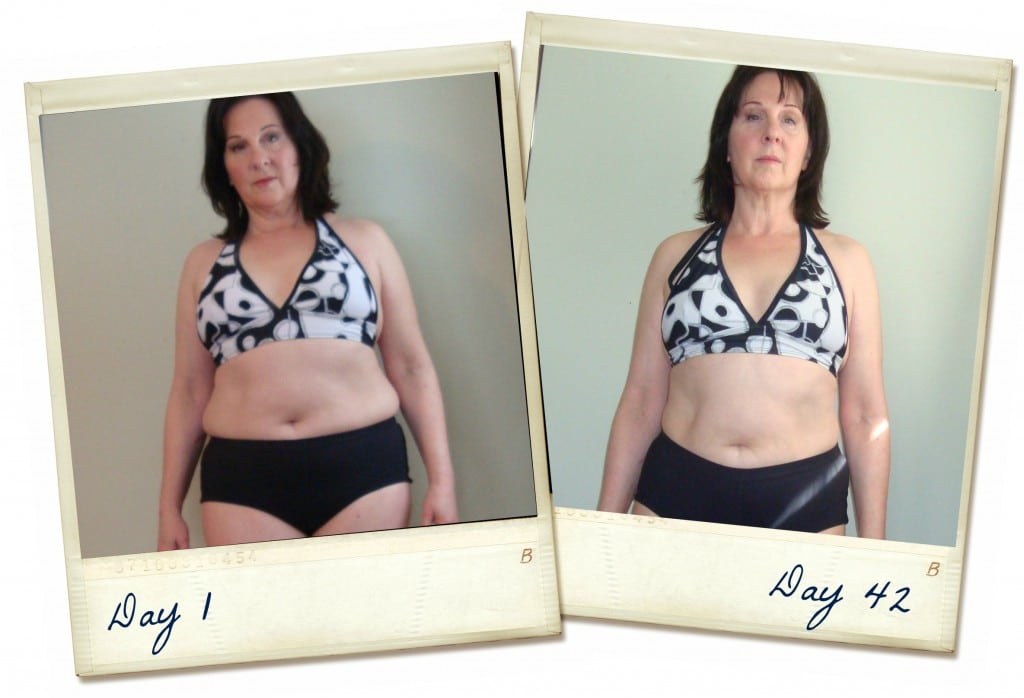 After years of trying dozens of different diets, Deborah came to the beta-test program with years of failure behind her–and lots of frustration. Like many women I work with, she’s tried everything. She’d bought books, printed menu plans, and played with a million bizarre food combinations. She’d hunted through the dark archives of the internet–trying even the most restrictive and trendy diet options in the hope that something–anything!–would work.

Have you heard of the Cabbage Soup diet–the 7-day plan that promises 10 instant pounds of weight loss, so long as you’re willing to starve yourself? Yeah, Deborah did that, too.

Believe it or not, every one of the diets failed her in some way. They left her hungry or lacking energy. Some of them were complex and confusing, making it almost impossible to follow them for any extended period of time.

A few of the diets she tried moved the needle on the scale a bit, but it would always bounce back up again. She gained more and more weight, regardless the number of promising programs she took part in.

Then, she joined my beta test for the All-Day Fat Burning Diet. With a focus on abundant real food, short-yet-effective workouts, and a simple approach to carb cycling, Deborah finally started to see significant change. She melted FIVE POUNDS in Week One. And continued to lose 2-4 pounds every week thereafter.

Most diets promise a one-pound per week weight loss. And that one pound comes at a cost–you typically have to make intense lifestyle changes, enroll in special meal programs, and muster every ounce of willpower to survive hours of aching hunger.  These were all aspects of traditional weight loss regiments that I wanted to change.

Science is now showing sevreal small yet powerful protocols that skyrocket metabolism,  combat cravings, and make it so you can enjoy whole, healthy, satisfying foods–all while dropping pounds! I’ve incorporated these ideas into the All-Day Fat Burning Diet and am delighted to see it being used so successfully with people like Deborah.

I’m excited to share the details of the All-Day Fat Burning Diet with you when it hits bookstores in December. Until then, I want to share a behind-the-scenes look at Deborah’s success. I’m sharing an actual screengrab of her weekly scorecard, then and insights taken directly Food Journal. I’m hoping her real life success will motivate and inspire you.

I doesn’t matter how many diets you tried. If they haven’t worked, it doesn’t mean your a failure–it means that the diet has failed you.  As you’ll discover from Deborah’s story–even when you think you’ve tried ‘everything’–it’s never too late to find weight loss success. 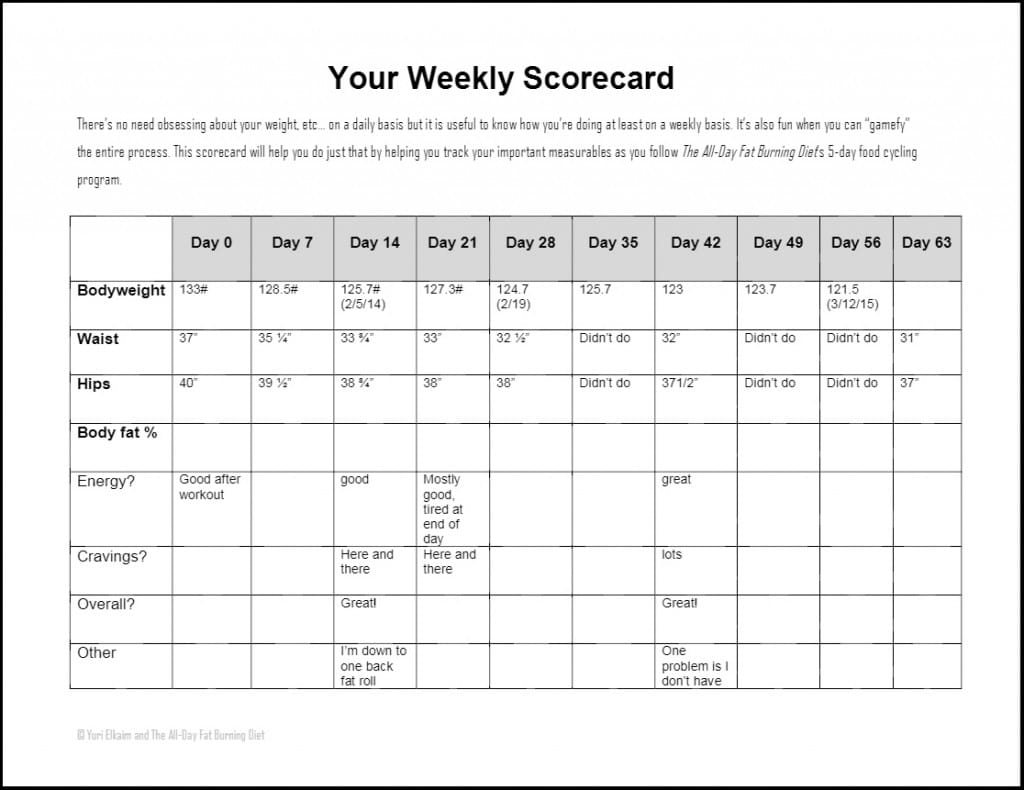 Well, I lost over 11 pounds and 10 inches in 6 weeks. I’d say that’s a success! When I first went into nursing school 20 years ago, I gained 20 pounds. I think I gained 10 more with every degree I got thereafter. I’ve tried many many diets over the years: The Cabbage soup diet, low carb, low-cal, yeast Free, detox diets–you name it! My weight loss had been minimal and I always gained it back because e it was not something I could sustain over time.

I have to say; I probably could have seen better results with the All-Day Fat burning diet if I had been more adherent. But I don’t see this as a failure. What I’ve learned from this experience is that I can still lose weight by following this plan—even when I take some breaks here and there.

I see this as something I can continue long term. I really appreciate you letting me join the beta test. Thank you for all the great coaching that came with it, too. Thank you! 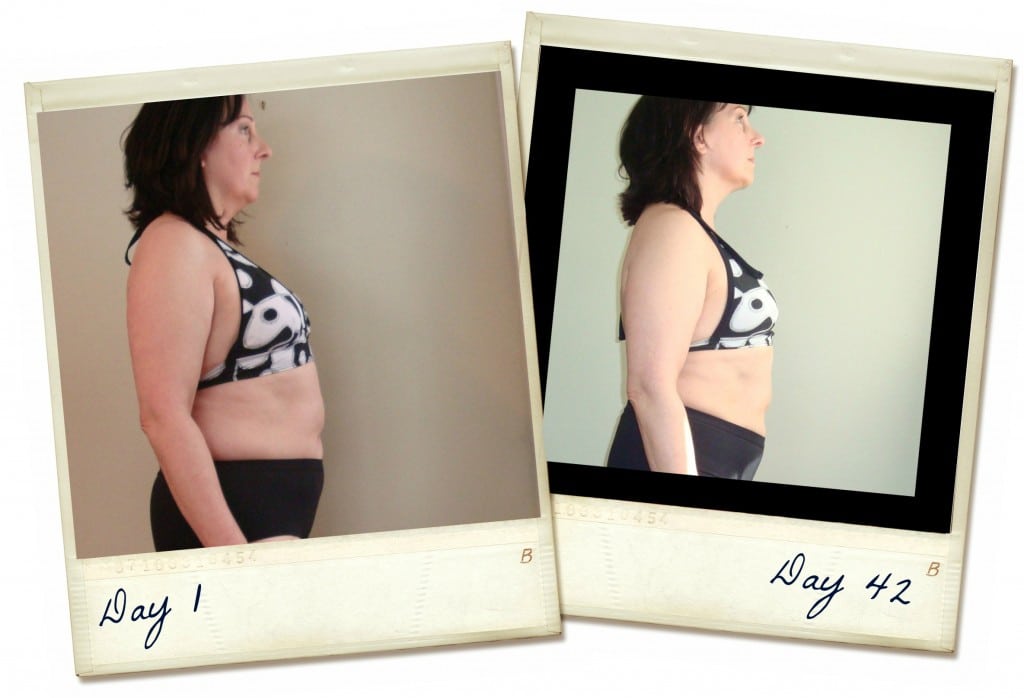 Keeping a food journal can DOUBLE your weight loss success. Tracking what you eat and how it makes you feel is such an important part of successful dieting, I’ve created one that you can download instantly…FOR FREE.