You are here: Home / Healthy Eating / Starvation Mode: Is It Actually Real?

Starvation Mode: Is It Actually Real? 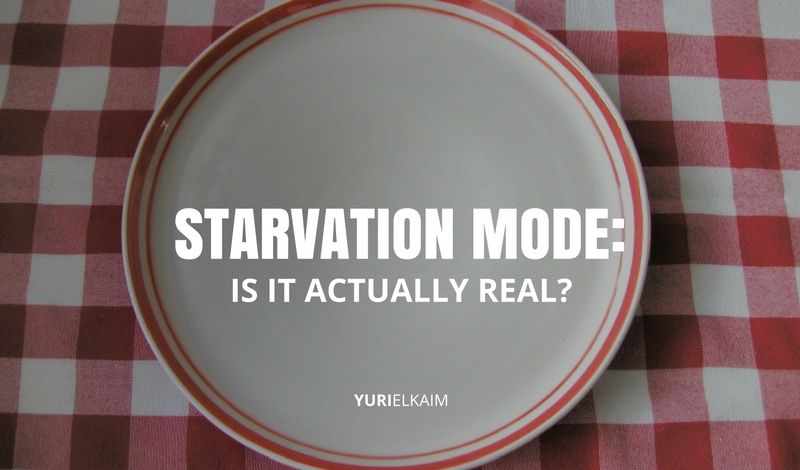 If you’ve ever been on a diet, you know the drill: the weight starts sliding off fast and then it slowly gets harder and harder to get the scale to budge.

A quick Google search and you’ll probably come to the conclusion that you’ve somehow crept into the dreaded “starvation mode” and your metabolism has been wrecked, even though you were only cutting out a few hundred calories a day.

We’ve all been warned that skipping a meal or cutting back too much on calories will cause our metabolism to go haywire, sending us straight into that terrifying spiral known as “starvation mode.”

It becomes impossible to lose any weight, regardless of how many salads you eat or how many hours you spend at the gym.

Every calorie that touches your lips is immediately stored as fat, making all weight loss efforts completely futile.

At least that’s what they say.

But is starvation mode real? And what are the consequences if you accidentally end up there?

The truth is that starvation mode is real (kind of), but it’s a lot more complicated than you’ve probably heard.

Lucky for us, our body is incredibly adaptable and when we don’t give it the nutrients it requires through food, it gets creative and finds ways to produce energy from other sources.

So will you slip into starvation mode by going on a diet or fasting for a day or two? No.

But let’s take a more in-depth look at the intricate mechanisms behind this process.

To really understand starvation, we need to first look at the cycle that we go through every day between meals.

Between our evening meal and our first meal in the morning, we go through something called the “starve-feed cycle.”

There are three stages to this cycle.

After our evening meal, the post-absorptive or “well-fed” state sets in. This usually lasts for about four hours after each meal. During this state, energy requirements are met solely through the diet.

Glucose, amino acids, and lipids are all carried to the blood, which signals the secretion of insulin, marking the fed state.

Insulin prompts the storage of fuels and leads to protein synthesis.

Extra glucose in the blood is stored as glycogen in the liver to be used when needed.

A few hours after eating, blood glucose levels dip, leading to a decrease in insulin and an increase in glucagon secretion.

Glucagon is a hormone that signals the start of the starved state. Glycogen stores are released from the liver and broken down into glucose to be used as energy.

The decrease in insulin means that the amount of glucose carried into the muscles and adipose (fat) tissues is decreased. This sets off a chain reaction, spurring the liver to release more glucose.

After we eat again, the body enters the re-fed state.

In this stage, the liver continues producing glucose from other sources, leaving the glucose we consume for the rest of the bodies.

After the liver replenishes its glycogen stores, it will begin to use glucose once again.

The Phases of Starvation

So what happens if we continue fasting well beyond breakfast?

Prolonged fasting can lead to starvation, which can alter the way our metabolism works.

Here are the three main stages during starvation mode, which occur between the early fasting state and the re-fed state.

First, glycogen from the liver is broken down into glucose.

But after a few hours, those glycogen stores are depleted and the body turns to proteins and fats to produce the energy it needs.

Fats are broken down into glycerol and fatty acid. Fatty acids account for the main source of energy from fats, but glycerol can also produce a small amount of glucose.

The amino acids found in protein can also be used to create glucose for energy, although this is usually in small amounts.

The second stage of starvation uses fats as the primary source of energy.

Fatty acids are converted into ketone bodies by the liver, which can be used as energy for the body. After a week or so, the brain begins using ketones for energy as well.

During this phase, proteins that are not essential might also be used as energy.

This phase can last several weeks, depending on the amount of fat stores present in the body.

Once fat stores are depleted, proteins become the main source of energy for the body.

Amino acids from muscles are broken down and converted to glucose. As proteins are lost from cells, cell function disintegrates and signs of starvation really start to set in.

Starvation affects nearly every aspect of our health and wellbeing and manifests as both physical and mental symptoms.

The severity of starvation mode symptoms was demonstrated during a 1944 study known as the Minnesota Starvation Experiment.

For this study, 36 men volunteered to essentially become human guinea pigs to investigate the effects on starvation. Researchers wanted to learn more about the effects of the widespread famine spreading across Europe during World War II (1).

Over 13 months, men were fed diets consisting of approximately 1,600 calories each day. While this might not sound like starvation, remember that it was well below their needs and was sustained over a long period of time.

After a 12-week control period where participants consumed about 3,200 calories daily, calories were slashed by 50 percent for the six-month period of starvation.

Almost immediately, they reported a decline in energy.

Not Just Your Body

Clearly, starvation can impact more than just the waistline. Here are some of the most common signs of starvation mode that occur as the body is deprived of food:

Another surprising side effect of starvation mode is dehydration.

Even though when we think of staying hydrated, we usually think of drinking enough water or fluids, we actually get a great deal of our fluid intake from the foods we eat.

As dehydration progresses in severity, it can cause an extreme thirst, confusion, and a loss of skin elasticity.

Extended periods of starvation can lead to dangerous and often fatal consequences.

Vital organs like the heart and lungs slowly shrink and lose functionality. Susceptibility to disease due to a weakened immune system can also occur and cause detrimental effects.

Starvation mode is, in fact, a natural metabolic process that our body goes through during times of scarcity.

The popular starvation mode claims that warn of a weight loss plateau, increased fat storage, and weight gain, however, couldn’t be further from the truth.

It doesn’t just happen overnight; it takes several weeks or even months of large calorie deficits before the body will begin resorting to breaking down muscle for energy and truly enter “starvation mode.”

That’s why it can be so hard to quantify exactly how long it might take to enter true starvation.

Should You Try Fasting?

It isn’t a black-and-white, all-or-nothing concept. Eating less than what your body needs over a prolonged period of time can eventually take its toll, but fasting once a week won’t cause any harm.

Intermittent fasting, when done safely, can actually be an effective way to kick-start a fat-burning diet while also stimulating muscle growth by increasing the production of growth hormone (2).

And, no, a day without food won’t kill your metabolism or cause massive muscle loss.

It’s important to understand starvation mode and the natural metabolic cycles of the body so that we can use it to our advantage.

I encourage practicing intermittent fasting as a way to boost fat-burning, promote mindfulness, and keep insulin levels under control by pushing the body to use up fat stores instead of glucose for a short period of time.

Pick one day a week and integrate it along with a healthy diet and regular exercise to optimize results.

On your fasting day, stick to drinking herbal tea and water for 18 hours. It’s a lot easier than it sounds; finish your last meal at 10 p.m. and then have your next meal at 4pm the next day.

Think about it — by 9 a.m. the next day (when you might usually eat breakfast), you’ll already be 11 hours in … not bad, right?

Be Attuned to Your Body

As with nearly everything, paying careful attention to your body’s needs and treating it well is the way with go.

If you give your body what it needs without being overly restrictive, there’s no need to worry about starvation mode.

Are you feeling “stuck” when it comes to losing weight?

Does what work before no longer work now?

It’s not because you don’t have willpower. There are reasons your body is holding on to excess fat and we can get to the bottom of them!

Check out the All-Day Fat Burning Diet to discover some of the little-known – but fixable  – reasons our bodies cling to weight. Click the banner to learn more!