The Surprising Dangers of Sitting (and 5 Simple Solutions) | Yuri Elkaim

The Surprising Dangers of Sitting (and 5 Simple Solutions) 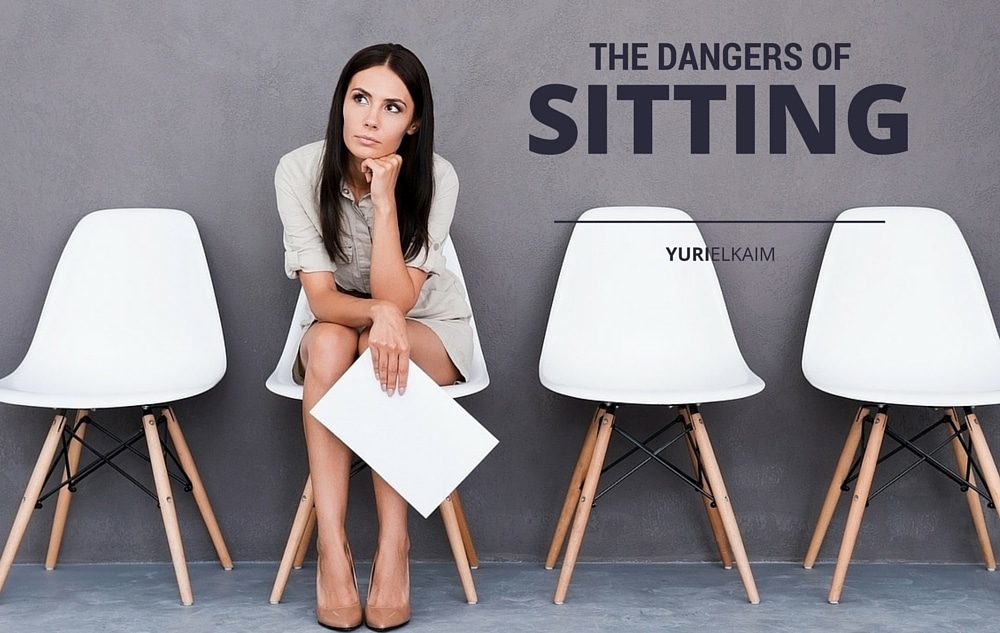 Let me ask you something: does sitting in your office chair all day feel as if it’s priming you for optimal health? Probably not, because even if you’re not fully conscious of it, there’s some part of you that’s aware of the dangers of sitting.

A big part of my mission is sharing healthy habits that improve both the quality and quantity of your life. It’s a precious thing, so why not make it better?

I’m sure you’re aware of some of the more obvious ways to do this—eating more vegetables, cutting back on sugar, etc.—but did you know that sitting too much can be harmful to your health?

Let’s take a look at exactly why this is.

Understanding the Dangers of Sitting

It seems every conversation in wellness  begins with the concept of the caveman. So, let’s start there.

Imagine you lived in paleolithic times. You spend your days hunting and gathering.  Some days it’s nuts and berries; others it’s pheasant, buffalo or chicken. You commune with your tribe, build fires at night and chant to the moon.

Truthfully, we don’t know that much about the specifics of the paleolithic period, but we do know it doesn’t have much in common with how we live today. Long gone are the days which required hunting, gathering, and hard physical labor at work and at home.

Now a person can have food available and make a living without having to move very much at all.

Unfortunately, our simple, sedentary life may be killing us.

Several new studies had found an astonishing link between the amount of time you spend sitting and the number of years you live. The most concerning aspect to these studies? They’ve found the effects last no matter how much you exercise.

That’s right: you can sit all day, spend three hours running, and still end up with the same net effects as someone who sat all day and stood in the kitchen making a three-hour meal.

These are the very real dangers of sitting. Regardless your activity level, if you spend the majority of your day sitting down, it’s time to seriously consider a solution for sitting.

Unfortunately, this trend started all the way back in the office culture 60s and has led to a dramatic change of the average work place. (1)As technology increased, our jobs have become less and less active.

Now, only about 20% of jobs even require just moderate physical activity.

Not only has this significantly contributed to the climbing rate of obesity, but it’s also forced more of our physical activity into the free time outside of work.

That’s no good, but don’t worry, because I’m going to propose some solutions that do directly address the problem and even help reverse it!

The Damaging Effects of Sitting Down 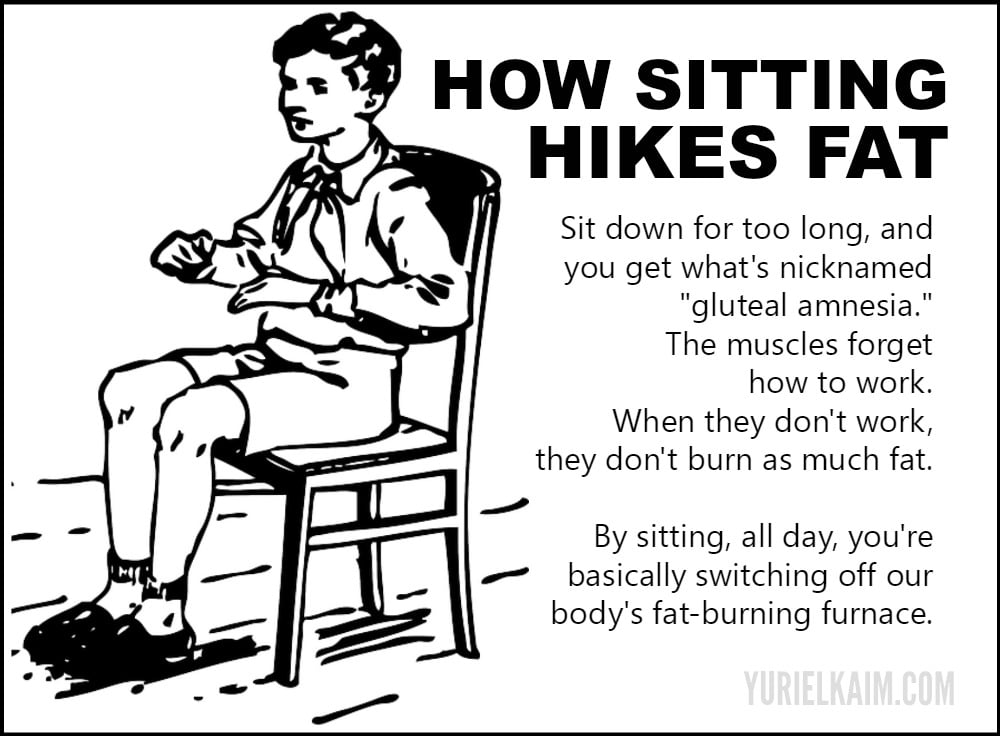 New research is now saying that one of the biggest dangers of sitting is a greater risk of several major killers, like heart disease, diabetes, cancer and death, and that this increased risk comes regardless of how much one exercises. (2)

Which is pretty scary news for most of us, considering more than half of the average person’s day involves sitting (often with a screen in our face).

The researchers who found this increased risk with sitting also recommended that health messages include encouragement for both exercising more and reducing all sedentary types of time.

Another study from the Journal of the National Cancer Institute reports an increased risk for three particular cancers when individuals have high amounts of physical inactivity: colon, endometrial, and lung cancer. [3]

Furthermore, this risk for cancer was increased for every 2 hours more a person spent sitting (8% for colon cancer, 10% for endometrial cancer, 6% for lung cancer), and once again this remained constant despite how active someone was.

Why the Body Hates Sitting

The “damage” of inactivity may start to begin with about an hour of sitting, since this is when blood begins to pool in the lower extremity and circulation shuts down. (4)

You see, the body craves movement.

Even the tiniest of tasks like slow walking, bending over to pick something up or reaching hands above our heads all keep our blood moving and metabolism running. These small monotonous tasks involve contracting muscles, slightly increased breathing, more brain activity, our blood vessels dilating, etc. All of these tiny physical stimuli keep our bodies functioning well.

You’ve probably never thought about it, but there are crazy dynamics that happen in our bodies even during normal activities we undertake every day.

You know what happens when we’re sitting still? Creep.

No, I’m not calling you names. I’m actually referring to the phenomenon of “non-movement” called creep. Tune in below as I explain just what “creep” actually is.

So what can you do to ward off the dangers of sitting?

Clearly part of the problem is with our environment and culture (not something that’s easily changed). Much of what has caused a lot of this sitting frenzy isn’t a lack of motivation or just plain laziness (well, maybe for some of us…).

Regardless of the reason we’re in this state—laziness or not—there’s a lot one can and should do.

1. Get to Bed Earlier

One solution may involve when we choose to lie down for sleep, as those who stay up later in the night find more barriers to exercise and be active according to new research. [5]

The study’s experts found that “night owls” in general spent more time sitting and also had less consistency in exercise programs compared to people who went to bed at a more conventional time.

The obvious thought here is that people who are tired are much less likely to be active, but there also may be more to the equation than this. There’s also evidence that being sleep deprived makes people perceive exercise to be harder overall. [6]

Since the damage begins after about 1 hour, one simple idea to avoid the dangers of sitting is to take frequent breaks by standing or taking brisk walks whenever possible. (7)

This has already been suggested through research to be protective for our hearts and overall health, so it’s a good way to lower some of those risks we talked about earlier.

Remember too, it doesn’t take much to keep blood flowing.

Below is a simple 3-minute “Wake the Body Up” routine that can be done to break up periods of sitting. You can download this one-page printable and post it near your desk to remind you to take “sitting breaks.”

Ideally, you’ll move your body every 30 minutes. But aim to add this routine after 1-2 hours of sitting, at the minimum. It will get your blood flowing, reinvigorate your energy, and offer beneficial rest from, well, resting. 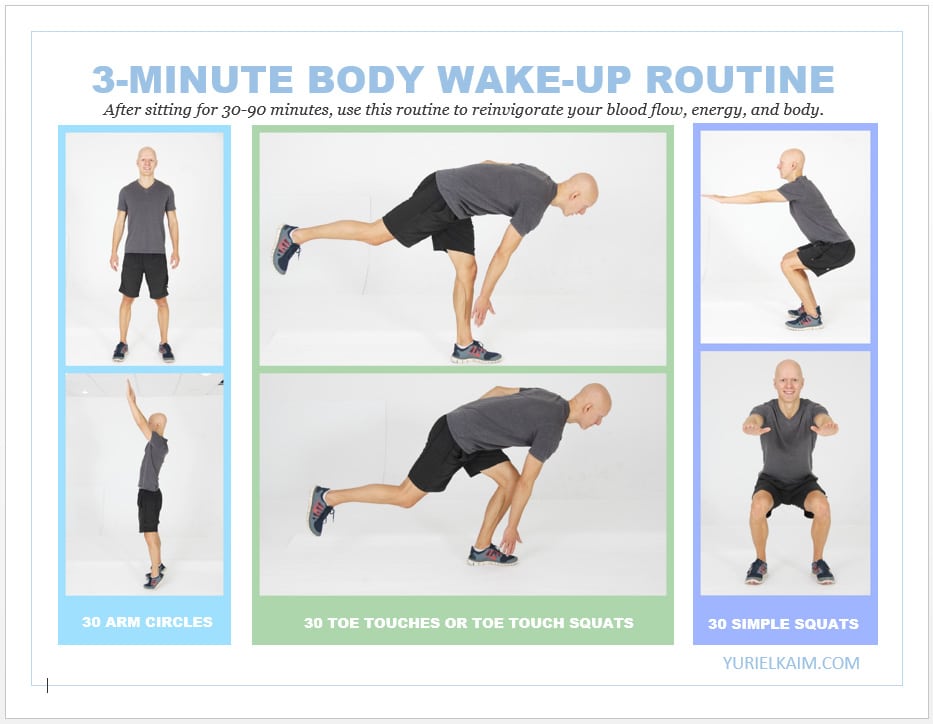 Next, why not just eliminate sitting all together?

The traditional cubical and desk are seeing a decline as more people try active working stations like standing desks, treadmill desks or bike desks. These can be adapted into almost any office setting and there’s already research that a person can show their boss indicating how active work stations do NOT impair work performance. (8)

You may even be able to sell your boss and coworkers on the evidence of health boosting and possibly increased productivity!

At the very least, try eliminating your chair and replace it with a yoga ball. You may even find this is more comfortable and keeps you feeling naturally energized throughout the day.

Another small solution is to use your TV as a guide. Now I don’t recommend watching TV in the first place, but if you do, then you can use the commercials as indicators to get up and move around until your show comes back on.

Each 30 minute show usually has about three 4-5 minute commercials, which is the perfect time to tidy up the house, make some tea or anything else to get your blood flowing again.

5. Spice up Your Circulation

Physical activity should be the first approach to working against this damage from sitting, though if you want even more protection, there are some foods which may help boost circulation by themselves.

Some research has shown that a spicy solution of turmeric or curcumin (or both) regularly supplemented or used in foods can help boost blood circulation to parts of the body. (9)

Try adding turmeric to your morning smoothie. Here’s one favorite recipe that makes it easy to get this potent anti-inflammatory into your daily diet. Adults should aim for 2-5 grams daily, that’s about 1/2-1 teaspoon. 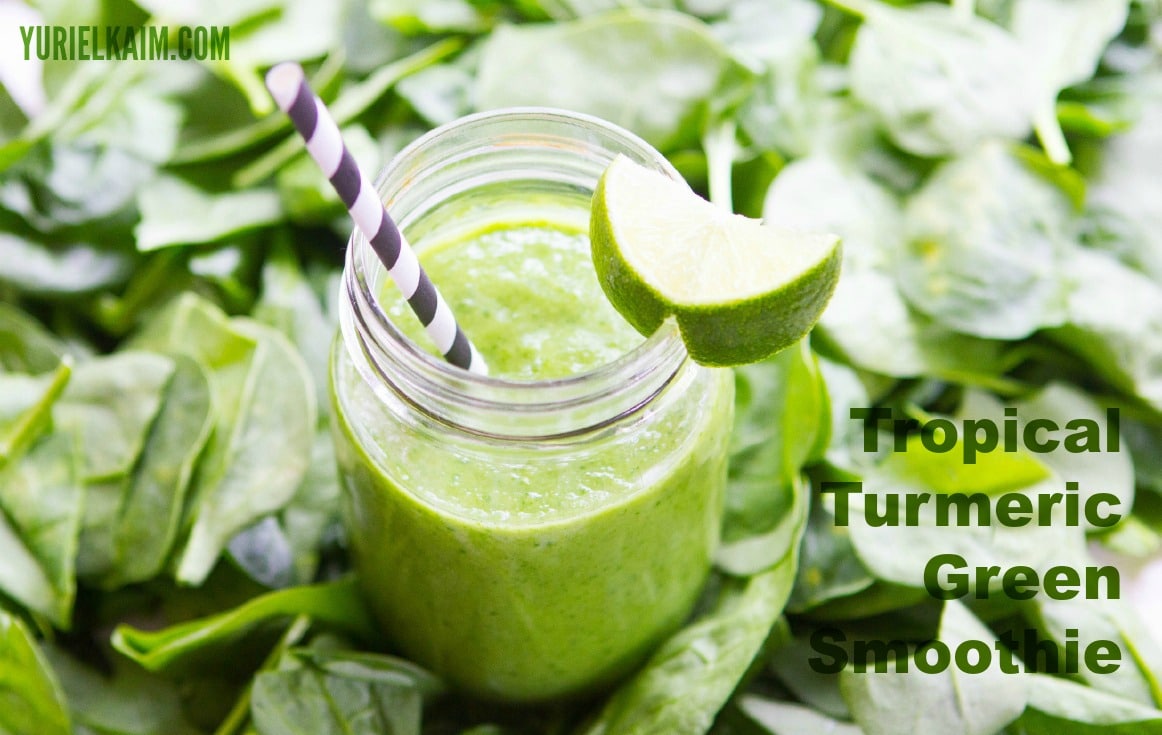 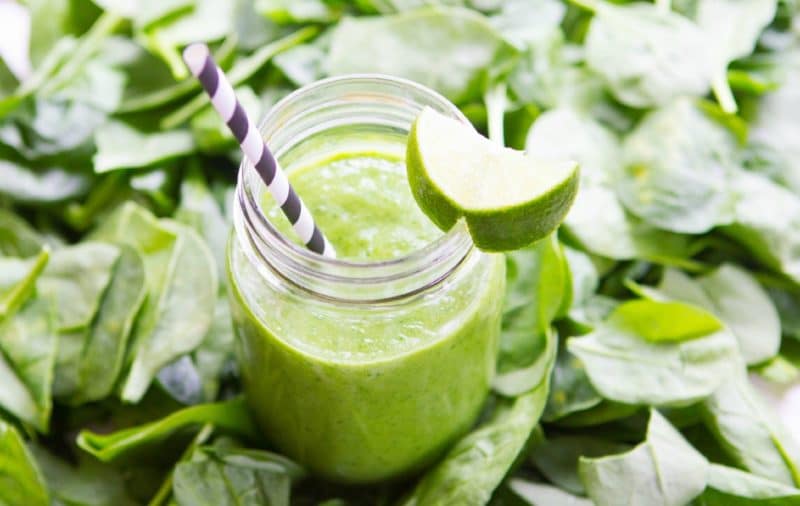 Votes: 1
Rating: 4
You:
Rate this recipe!
Ingredients
Instructions
Share this Recipe
After considering these five solutions to avoid the dangers of sitting, remember that these ideas take time to fully incorporate.

Most people aren’t able to go from sitting at work to all day standing right away. A good goal is to first just replace half of your sedentary time with more activity, then progress from there.

As humans, we’re social creatures. And going against popular practices takes personal strength. While it may feel odd to switch up some of your sitting routines, the long-term effects may just save your life.

An estimated 1 in 5 Americans now show symptoms of metabolic syndrome. (10) This number has been exponentially growing over the last two decades. More than 29 million Americans currently suffer with Type 2 diabetes.  (11) Everyday, more than 2200 people die of heart disease. (12)

These statistics are sobering. The masses aren’t doing so well.

What we’re doing isn’t working. The long-term outlook for too many lives is devastatingly grim.

Have courage to go against the tides of popularity and custom. Don’t spend your life in a chair. The science about the dangers of sitting is too straightforward to ignore. The benefits of standing more and sitting less may literally be the different between life and death.

Why I Don’t Like Cheat Meals (And What’s Better)