Is CrossFit Dangerous? 5 Truths You Need to Know | Yuri Elkaim

Is CrossFit Dangerous? 5 Shocking Truths You Need to Know

In the late 1990s, CrossFit workouts exploded onto the fitness scene, quickly growing in popularity and even landing on TV as a fierce competition.

Chances are, you’ve heard about CrossFit and you’ve been at least a little curious about it. Maybe you’ve even tried it.

But despite the hype, many experts have concerns about the programming behind CrossFit’s infamously difficult workouts – and the safety with which they’re carried out.

It makes sense that before deciding whether or not you want to jump on the CrossFit bandwagon, you would want to check out some CrossFit fitness tips and learn more about it.

According to its official website “CrossFit is constantly varied functional movements performed at relatively high intensity.” (1)

But what does that mean, exactly?

Basically, it means that CrossFit workouts feature a wide variety of movements – and many slightly unorthodox fitness tools – to simulate the demands of a highly active life. It features a large collection of workouts and training styles that take the idea of cross training to a whole different level.

The idea behind this – and all “functional training” programs – is to improve your overall power and movement efficiency.

As you may have seen or experienced, CrossFit also makes powerful use of a sense of community, fostered in both the digital and physical worlds.

By turning fitness into a competition, CrossFit inventor Greg Glassman has placed a powerful motivational force right into the heart of his program.

Should You Do CrossFit?

No one can deny that CrossFit gets results. There are some truly impressive athletes doing some amazing things within the sport.

But what about the average person? Someone who isn’t an elite-level athlete and just wants to be healthy? Is CrossFit dangerous for them?

Ultimately, that’s a very personal question – one that no one else can really answer for you.

What I can do, however, is present you with a few important facts about CrossFit that you may not be aware of. Along the way, we’ll talk about a few fitness tips that can help you make good decisions when it comes to your workout routine.

1. There Is a High Risk of Injury

In what has become an infamous interview with The New York Times in 2005, Glassman made some startling comments about CrossFit. Specifically, he was quoted as saying “It can kill you. I’ve always been completely honest about that (2).”

And there is a huge mound of evidence – taken both from studies and from personal experiences of CrossFitters – to back up the dangers of CrossFit.

For example, in 2013 a questionnaire was sent out to the CrossFitters of the world, looking for information about any injuries they might have sustained from their workouts (3).

The results were published in Journal of Strength and Conditioning Research.

Of the 132 responses that came back, a startling 97 people reported having suffered from some injury as a result of their CrossFit training – equating to a 73.5 percent injury rate.

It’s also worth noting that those 97 people dealt with a total of 186 injuries, meaning that many of them had had multiple injuries.

We can’t ignore the fact that the same study also stated that CrossFit’s injury rates are similar with those from Olympic weightlifting, power lifting and gymnastics – and even lower than contact sports.

But, again, the average person interested in leading a healthier life does not necessarily compete in those sports. They are looking to do CrossFit simply as a means of getting and staying fit.

CrossFit workouts, though, are commonly done by people who have little-to-no fitness experience.

It’s also important to point out that the injuries related to CrossFit aren’t always restricted to the muscles and connective tissue.

Occasionally, even organ damage can result. While it is rare, CrossFitters have reported cases of a potentially fatal condition called rhabdomyolysis – which happens when a person experiences extreme muscle breakdown, which releases substances into the blood which are toxic to the kidneys (4).

Again, rhabdomyolysis is extremely rare, but is still a risk whenever you push your body beyond its capabilities.

CrossFit borrows movements from Olympic weightlifting, gymnastics and many other sports that require a lot of skill, practice, and discipline to execute safely and efficiently.

Unfortunately, the fine, technical details of these movements are not always given the amount of attention that they demand.

This is generally because of the competitive nature of CrossFit, which emphasizes speed and tends to ignore proper form.

This is largely the reason for CrossFit’s high injury rates. But, even if you don’t suffer an obvious injury from your CrossFit workouts, this poor form could have a far-reaching impact.

For one thing, learning bad form means that you aren’t learning good form.

And, since many people naturally have some sort of postural problem or misalignment, this is a major concern.

Your workouts should help to improve your overall health, and increasing your movement efficiency is a powerful step in that direction.

But performing any movement over and over again is bound to catch up with you, even if the effects don’t show up for years.

CrossFit, for example, encourages the somewhat controversial “kipping pull-up” as a way to crank through many reps of this challenging exercise quickly. For this unfamiliar with the kip, this means that athletes basically swing their bodies up towards the pull-up bar rather than pulling themselves up.

So, what’s the problem with that? If kipping helps you execute a movement you won’t normally be able to do or increases your speed, who cares?

A strict pull-up allows the large muscles of your upper back – the latissimus dorsi  – to do the majority of the work, increasing their strength. Kipping, however, limits how much your lats can contribute and, as a results, reduces any real improvements in strength that you might be looking for.

Plus, your shoulders won’t be too happy about the kip, either. It’s a fast, strange movement that places a huge amount of stress on what is already a hard-working joint.

Similar examples can be found throughout the CrossFit program.

In all fairness, I should point out that these exercises can be done in a way that reduces risk – if you’re working with a knowledgeable coach.

Unfortunately, many CrossFit coaches have very little education outside of their CrossFit-specific certification and aren’t always in the best position to be teaching others.

And that’s assuming that you’re even working with a coach. CrossFit workouts are easily available online and daily workouts are posted on the company’s official website, allowing anyone to run through the program on their own.

For a long time, the fitness world ran on a “no pain, no gain” mentality.

Modern research, however, has changed the way that many people view the physical pain associated with exercise and we now understand that it’s not a desirable outcome.

Among CrossFitters, though, this axiom is still alive and well. As a community, CrossFit encourages people to push through pain, even to the point of injury, vomiting or both. 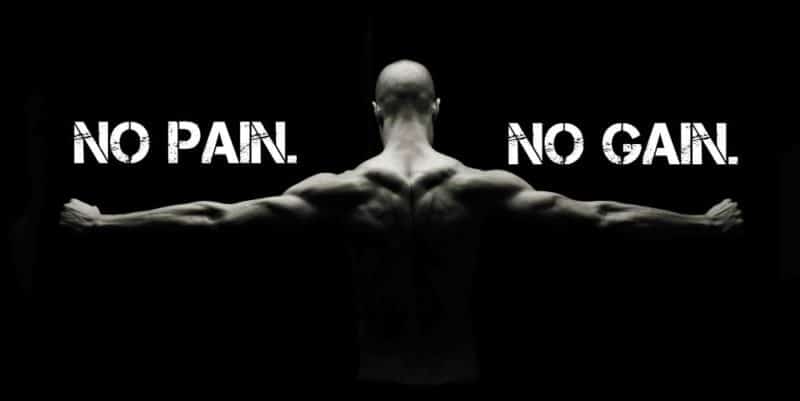 In fact, it’s not unusual to see “puke buckets” at CrossFit boxes (the CrossFit term for “gym”) for those occasions.

Continuing this same view of pain and pushing yourself, Glassman – who openly admits that he doesn’t keep up with CrossFit’s workouts – said in that same 2005 interview:

“If you find the notion of falling off the rings and breaking your neck so foreign to you, then we don’t want you in our ranks.”

Pain is, in fact, a signal that something is wrong.

It is your brain telling you that there is a problem and you need to stop doing what you’re doing before things get worse. Pushing through that pain and ignoring those signals will greatly increase you risk of injury.

For many people, this attitude is also unrealistic and discouraging – creating high drop-out rates in the CrossFit community.

Your workouts should be something you enjoy and you can keep doing for years, without injury. The time you spend in the gym should improve your overall quality of life, not limit you.

4. Everyone Lifts the Same Amount of Weight

Often, prescribed workouts passed down from CrossFit HQ include predetermined, uniform weights, based on gender.

Why is that a problem?

Because not everyone can move the same about of weight safely. In a room of 10 people, you’re going to have a lot of variation when it comes to what sort of resistance each person is able to move with proper form.

Frankly, this is Workout Program Design 101. A key element in making progress toward your fitness goals is to work with a resistance that you personally can handle.

Trying to use a cookie-cutter approach and work with an arbitrary amount of resistance is likely to result in one of many unfavorable outcomes.

And if the weight is too light, your muscles won’t be challenged enough and you won’t make the progress you’re looking for.

Finally, we need to talk about nutrition.

When it comes to losing fat and building the physique you’re working toward, diet plays a much bigger role than exercise.

Your diet also has to be able to fuel your exercise. If you aren’t supplying your body with proper nutrition, it will not be able to fully recover from your workouts. When this happens, you may start to experience symptoms of overtraining syndrome, including decreased performance, depression, sleeplessness, even muscle loss and fat gain.

And the dietary recommendations that go along with CrossFit’s workouts are a little vague, at best. In general, CrossFit HQ advocates paleo, Zone and other high-protein, low-carb diets.

While I definitely agree that people tend to mishandle carbs, it’s important to recognize that this macronutrient is a major source of fuel for your body, especially during extremely intense workouts like those involved in CrossFit.

[Related: 4 Good Carbs to Eat for a Flat Belly]

So, without proper education, it’s entirely possible for CrossFitters to simply not eat in a way that supports their workouts.

It is notable that famed CrossFit athlete Rich Froning does not follow the paleo diet that is so popular among his peers.

Should the Dangers of CrossFit Stop You?

Forewarned is forearmed, as the saying goes. If you have a base of fitness and know the dangers of CrossFit – and take care to avoid them – then whether to try this rigorous form of workout is a personal decision.

The keys to success in almost any fitness endeavor include listening to your body, working within your limits, and adequately fueling and hydrating your body. It’s also important to schedule in much-needed rest time to ensure you don’t get overtrained or injured.

Ultimately, which fitness routine you decide to incorporate into your lifestyle is your choice.

If you are looking for a safe, fun, and effective way to burn off some body fat, check out my free Fat Blaster Workout. You’ll combine a powerful strength and interval cardio session all into one downloadable workout so that you get leaner and fitter, faster. Click the banner below to get it for FREE.

12 Crucial Dynamic Warm-up Exercises to Do Before Your Workout

6 Important Foods You Should Eat for Soothing Arthritis Pain