How to Do Belly Breathing Like a Pro | Yuri Elkaim

You are here: Home / Fat Burning Exercise / How to Do Belly Breathing Like a Pro 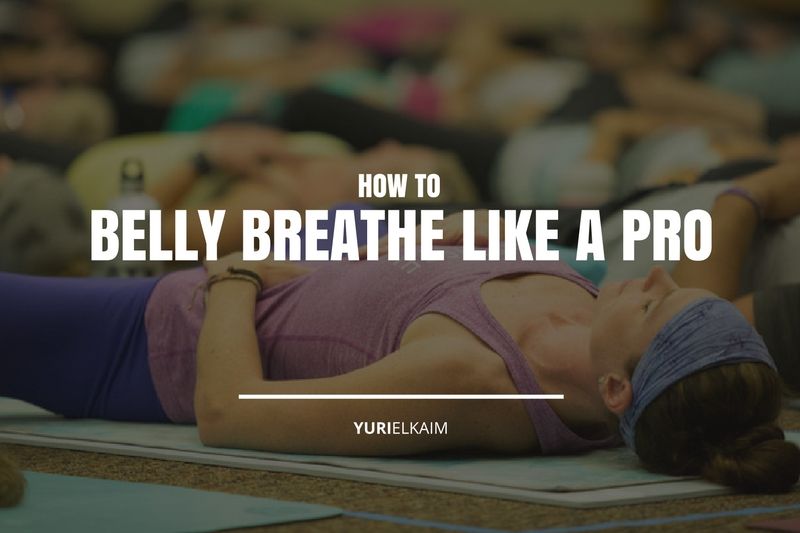 The topic of belly breathing often comes with a lot of questions:

But as odd it may sound, belly breathing is actually an ancient technique that has been practiced for thousands of years by cultures around the world.

In fact, an entire yoga discipline is dedicated exclusively to pranayama – the controlling of breath – which includes belly breathing (1).

What Exactly is Belly Breathing?

Belly breathing is also referred to as diaphragmatic breathing or abdominal breathing.

It gets its name from the way it uses the diaphragm (which lies below the lungs) to fully saturate the lungs with oxygen. This has the effect of pushing the belly outward. 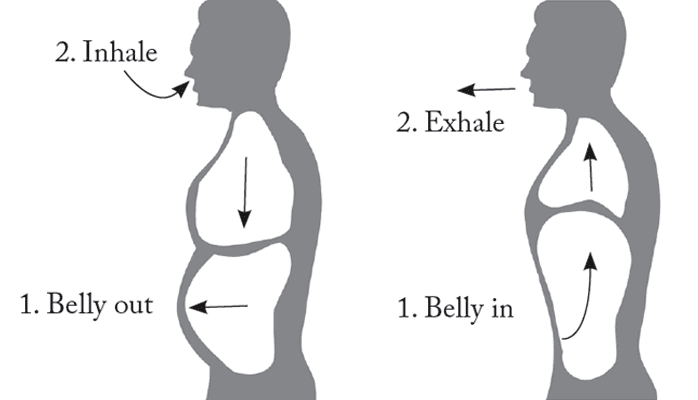 Now, you might be thinking, “Doesn’t this happen every time I breathe?”

Unfortunately, many of us get into the habit of breathing only through our chest, as we’re accustomed to the idea that our chest is where true breathing comes from.

On the contrary, too much chest breathing can result in something called “over-breathing,” which can cause us to feel breathless or anxious (2). 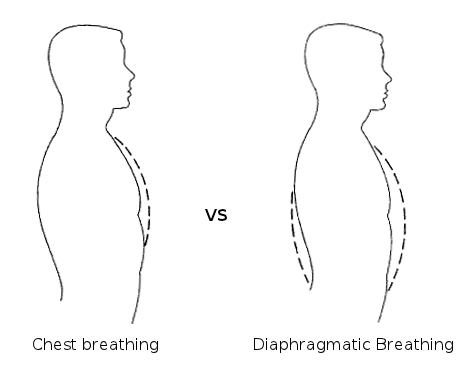 It also limits our ability to take in adequate oxygen and use our full lung capacity, which can result in even shallower breathing habits as we age.

Belly breathing can help correct over-breathing and chest breathing by training our bodies to breathe into our bellies instead of our chest when we take a breath.

This opens up the bottom portion of the lungs by expanding and contracting the diaphragm, allowing fresh oxygen to penetrate deep into the bottom of the lungs.

Aside from allowing us to take fuller, deeper breaths, there are several other remarkable benefits of practicing deep belly breathing.

And the best part? Cashing in on them is as easy as breathing deeply for 5 to 10 minutes a few times a day.

One of the amazing benefits of belly breathing is its ability to help you relax – almost instantly.

This is because of how it works with both our sympathetic and parasympathetic nervous systems.

The sympathetic nervous system is essentially the “fight or flight” side of our autonomic nervous system. It responds to anything we see as threatening, giving us the energy we need to either escape or do battle.

Now, while this was useful before advanced civilization spanned the globe (if we were trying to escape the clutches of a wild animal), it can be damaging in our modern world.

This is because our bodies can’t tell one stress from another, which can lead to a chronic stress response.

For example, your body doesn’t know the difference between a stressful workplace and a hungry wild animal that wants you for dinner – it simply perceives a threat.

So when you’re under pressure at work or elsewhere, you’re in a constant sympathetic “stressed” state. That leads to increased blood pressure, a slowing of digestion, and increased heart rate, among other effects.

That’s not a sustainable or healthy way to live – and that’s why we have the parasympathetic system.

The parasympathetic system is the opposite of the sympathetic. It’s also referred to as the “rest and digest” system, and is responsible for slowing the heart rate, lowering blood pressure, stimulating the digestive process, and producing a feeling of calm relaxation.

Belly breathing activates this system, which is huge news for those of us needing a relief from the constant stress of day-to-day life (3).

For instance, a 2011 study looked at 16 athletes after an exhaustive training session. Half of them practiced belly breathing after the workout.

Researchers found that for the belly breathers, levels of the stress hormone cortisol decreased and the relaxation hormone melatonin increased. Researchers theorized that belly (or diaphragmatic) breathing could help protect them from the long-term adverse effects of free radicals, (4).

Typically, when people think about controlling their blood sugar, breathing isn’t the first thing that comes to mind.

However, studies are now suggesting that maybe it should be.

These studies have discovered that diaphragmatic breathing exercises can help balance blood sugar levels and give better control to diabetic patients (5).

As I already mentioned, belly breathing activates the parasympathetic nervous system. Along with helping us relax, this system is largely responsible for stimulating digestion.

When the parasympathetic system kicks in, saliva production is increased, while stomach movement and secretions that help break down food also increase.

This is one of the reasons why we’re often reminded to sit down and enjoy our meals in a relaxed state. Being stressed or keyed up activates the opposite nervous system response – the sympathetic nervous system – which halts digestion, causing food to sit in our stomach (6).

This can be felt as a feeling of a “rock” sitting in our bellies. Luckily, doing a round of belly breathing before a meal can help ease us into the rest-and-digest state, which will lower our chances of dealing with indigestion.

Considering belly breathing’s stretching and constricting effect on the diaphragm, it makes sense that it would help strengthen and open the lungs.

Studies have shown this to be true by showing an improvement in lung volume and respiratory motion in healthy individuals, as well as increased oxygen levels in COPD patients in response to deep breathing exercises (7).

It turns out that breathing is so powerful it can actually alter our genes.

In a 2013 study that looked the body’s relaxation response which was stimulated using techniques such as deep breathing, researchers found that it enhanced expression of genes associated a variety of important functions.

Affected were genes involved in energy metabolism, mitochondrial function (which power our cells), insulin secretion, and telomere maintenance (which protect our DNA and play an important role in our aging process).

It also reduced the expression of genes linked to inflammatory response and stress-related pathways (8).

In other words, the body’s genetic response to relaxation techniques like deep breathing was to improve energy efficiency, while also positively altering how our genes respond to stress.

The researchers also noted that most of the gene changes were related to the immune response and cell death, highlighting that techniques like belly breathing can also have a significant effect on improving our immune system.

As you can see, belly breathing is a truly powerful exercise that can affect our body in numerous ways, all the way down to the genetic level.

This is an easy belly breathing exercise you can practice daily (or even multiple times per day) to strengthen the diaphragm and start receiving the multiple benefits of deep breathing. 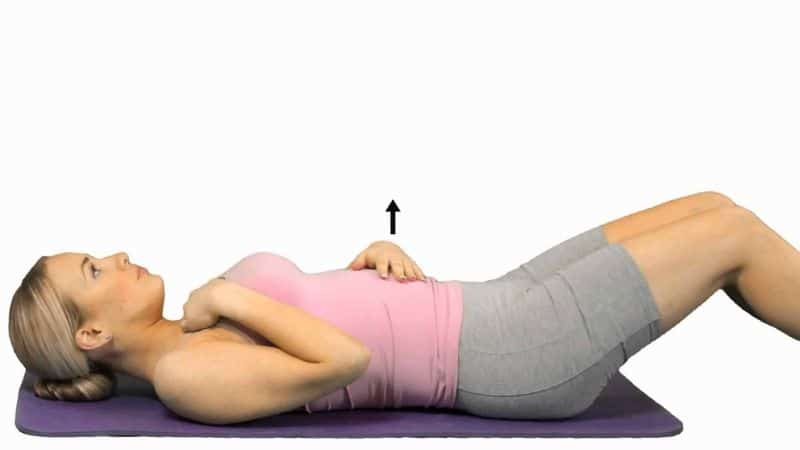 1. Begin lying on your back on a flat surface, head supported by a pillow. Bend your knees (you can place another pillow under your knees for support) and place one hand on your belly and another on your chest to feel your diaphragm as you breathe.

2. Now breath in slowly through your nose, feeling your stomach push against your hand as air fills the deepest point in your lungs. Note that your chest should remain as still as possible.

3. Exhale through your lips while tightening your stomach muscles, letting them fall inward.

Keep in mind that you may find it difficult to breathe through your belly at first, especially if you’ve never consciously tried diaphragmatic breathing before. Not to worry: your diaphragm will get stronger with time.

Eventually, you may be able to practice this technique sitting up, making it even easier to get in a session.

Try it Yourself and See

Whether you’re a beginner belly-breather or an experienced yogi looking for a deeper connection to your breath, this abdominal breathing technique will have you lowering your stress levels and on the path to gaining a stronger immune system.

Click the banner below to download my Workout Recovery Formula plan right now – because what happens between workouts is just as important as what happens during them.