The Truth About Intermittent Fasting and Weight Loss | Yuri Elkaim

You are here: Home / Healthy Eating / The Truth About Intermittent Fasting and Weight Loss

The Truth About Intermittent Fasting and Weight Loss

Today, I want to bust a common myth.

The reasoning is that the more you eat, the higher your metabolism will be.

But if you really think about it, it doesn’t make a lot of sense.

I don’t know about you, but I personally do not eat five to six times a day. Not only is it time-consuming to eat that often, but it’s almost physically impossible for many of us, especially if we’re a lighter frame.

I’m an ectomorph. I have a slighter frame; I can’t eat that amount of food.

I might have two to three meals a day. I have some friends who are much bigger and who eat a lot more, but most of us are lucky to eat three meals in a day.

Also, what really constitutes a meal?

A lot of studies consider an apple a meal. If you have coffee and you add sugar or milk to your coffee, the calories in that coffee could be considered a meal.

It’s very confusing and I want you to understand that you don’t have to believe all the nonsense because it’s not true.

How Eating Really Effects Your Metabolism

The truth is, the thermic effect of food (the energy it takes to digest it) only accounts for about 10% of your caloric burn in a given day.

70% of your caloric burn is actually due to your resting metabolic rate; the rate at which your essential function and movement burns energy.

The remaining 20% of your daily caloric expenditure comes from other things, like exercise and other activity over and above primary functional movement.

I looked at the research and I’m going to try to make this as simple as possible for you to understand, so I’m not going to quote specific studies here.

But I am going to explain the findings and conclusions of a number of well-respected studies and show you how to make them work for you.

The Effects of Different Diets on Metabolic Rate and Fat Burning

The basic findings of the research I found was that of the three different types of diet/exercise lifestyles, low-calorie, diet and exercise, or high-calorie, there was no difference between the groups as far as metabolic rate.

In other words, whether you eat a low or high-calorie diet does not raise or lower your basic metabolic rate.

Let me explain why this is.

Your resting metabolic rate is based on your amount of lean mass or muscle.

Muscle uses calories, fat and bone do not. So the only way to lower or raise your metabolic rate is by adding or losing lean muscle mass. 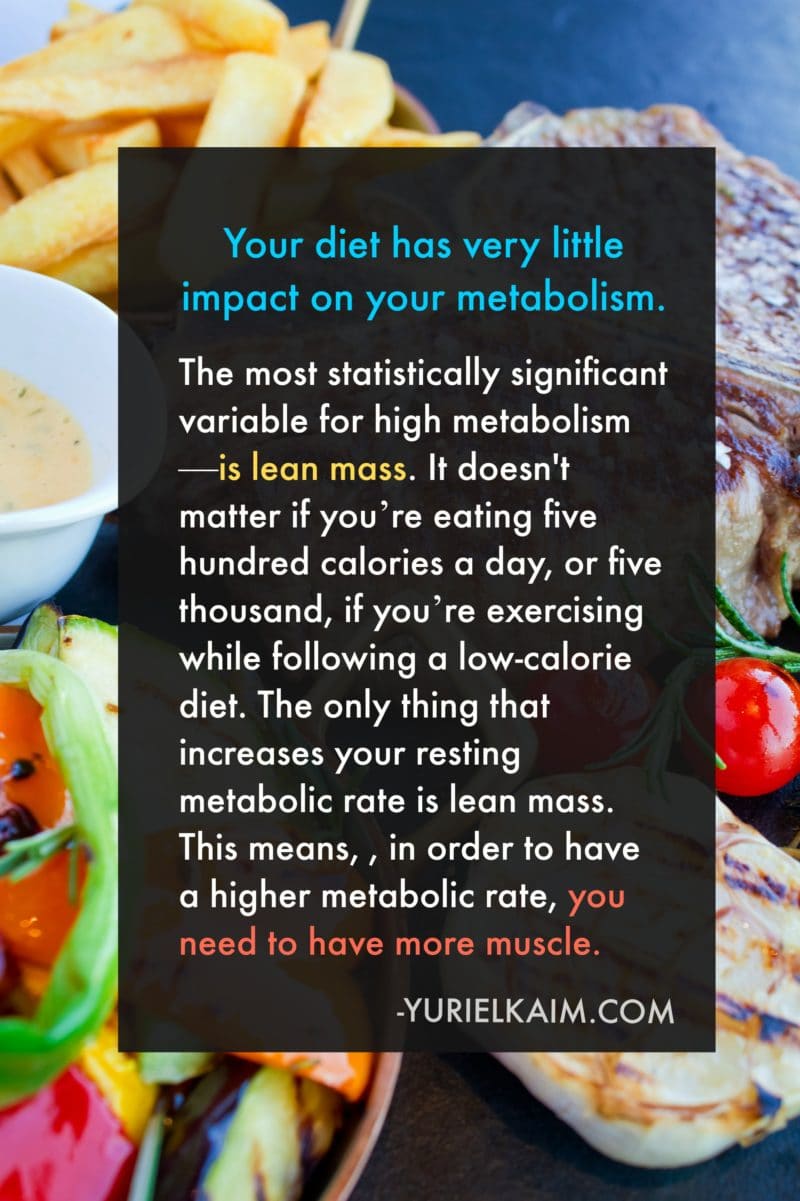 The #1 Way to Raise Your Metabolic Rate

What that means to you is that if you want to raise your base metabolic rate, you need to add more muscle to your body.

Let me tell you threes reasons why this is good news:

What this Research Means in Regard to Fasting

I’m a huge advocate of intermittent fasting, for several reasons that I’ll explain in a moment.

But one of the biggest arguments against intermittent fasting has always been that it causes your metabolic rate to slow down.

Well, the research studies I’ve just mentioned have shown that NOT to be the case.

A very, very low calorie diet, such as with a fast, had no impact on basic metabolic rate. However, fasting does have a great impact on your ability to lose stored fat and it’s not because of the calorie deficit.

There are two states in the body; there’s a fed state and a fasted stated.

When you eat food you’re considered to be in the fed state for several hours, as your body is digesting the food.

In the fasted state you have no food to digest. The body is essentially just working on what it has, and it’s going through a bunch of processes.

In one respected study, they looked at fasting for up to 36 hours. What they found was that in the first 24 hours, there was a 70% decrease in blood insulin levels.

That is extremely important to your fat loss goals.

Insulin is a storage hormone; it’s an anabolic hormone.

It stores sugar and fat in your fat cells, the sugar and fats that your body doesn’t need for immediate energy.

When insulin is high, there’s a lot of fat storing going on. When it’s low, your body is prompted to let go of the fat that’s already been stored.

The study showed that after the first 24 hours, there was a diminish in returns, so the more you fast, the less benefit to your blood insulin levels, so I don’t recommend fasting any longer than 36 hours.

The other thing is, when we’re in a fasted state, our body is looking to move to a different fuel source, which is essentially using more fat as a fuel.

When insulin goes down, there’s another hormone that the pancreas produces and secretes called.

Glucagon actually helps to maintain adequate blood sugar levels in the opposite fashion that insulin does. While insulin takes sugar out of the blood, glucagon will break down fat or blood sugar stores and increase sugar in the blood.

During a fasted state, when insulin levels are lower, glucagon is increased because now the pancreas is signaling a need for more sugar in the blood.

So glucagon goes into the fat and muscle cells and break down stored fat so that it can be converted back into a usable form of energy.

No, You Won’t Lose Muscle Because of Fasting

At the same time, the adrenal glands will kick out cortisol and epinephrine.

Those two hormones will go to your fat cells and activate hormone-sensitive lipase, which is a specific enzyme in the fat cells used to break down fat and allow it to be metabolized for fuel.

Additionally, fasting is one of the best known ways to increase human growth hormone, who’s role is to maintain and grow muscle (amongst other things).

Yes, it sounds odd, but not eating (for 18-24 hours) actually preserves your muscles by the surge in growth hormone that results from being in a fasted state.

This is why the scare-tactic that fasting will cause you to lose lean muscle is a fallacy.

Your body is designed to turn to stored fat for fuel in the absence of glycogen. It’s only after being in a fasted state for several weeks that your body will then begin to catabolize or rob muscle of proteins to use as fuel.

By fasting for only 24-48 hours (and I think 24 hours is plenty), you’re dramatically reducing your insulin levels and activating fat burning as fuel. You’re not in danger of losing lean muscle.

By the way, one other way that intermittent fasting helps you with your fat loss goals is that it gives you a healthier sense of the importance of food and the accuracy of your craving for it.

You learn to disconnect a bit from food as a source of pleasure, which can really help you the rest of the week, as you try to battle cravings and make good choices.

Here’s the video version of this blog post in the event you prefer watching to reading.

How to Add Intermittent Fasting to Your Life

It’s very easy to weave fasting into your week.

What I prefer is to loosen up quite a bit on the weekends, because that’s when food is really a social event for myself and my family.

Then, I stop eating at about 7pm on Sunday. By the time I wake up at 7am on Monday, I’m already 12 hours into my fast without even being awake for it.

I drink plenty of water and generally take it pretty easy as far as activity and exercise, and then I have a delicious meal at 6-7pm on Monday night.

By starting right after dinner on Sunday, you really only miss two meals in a 24 hour fast, so it’s easier to stick to it.

I guarantee this is something that will make a huge difference on so many levels of your health, your body’s ability to burn fat, and that psychological connection to food.

It’s really liberating not to have to think about food and it will help you reach your weight loss goals much more quickly.

With strength-training and intermittent fasting added to your week, you’ll increase your metabolism and prompt your hormones to burn stored fat at the same time.