Pallof Press: 5 Ways to Do One of the Best Core Exercises | Yuri Elkaim

You are here: Home / Fat Burning Exercise / Pallof Press: 5 Ways to Do One of the Best Core Exercises

Pallof Press: 5 Ways to Do One of the Best Core Exercises 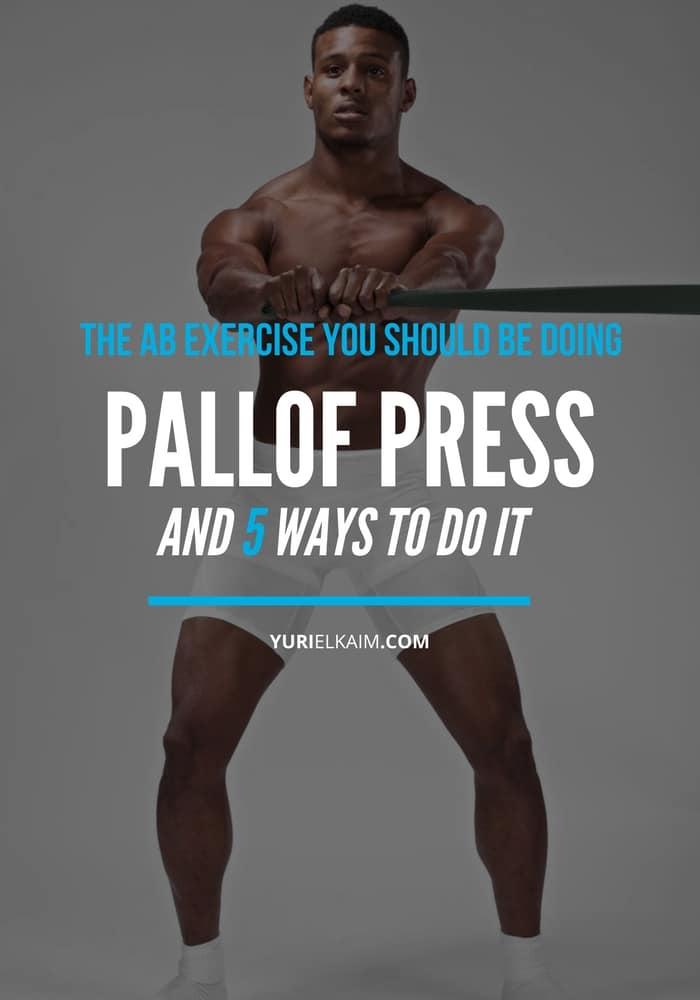 It’s time to forget everything you thought you knew about your abs.

And I mean everything, including the supposed “fact” that crunches are one of the best exercises for “six-pack abs.”

In fact, go ahead and forget about the idea of the six-pack while you’re at it, because what I’m about to share with you will inevitably lead to the washboard effect anyway (a better, stronger washboard, I might add).

The Truth Behind Your Abs

Here’s why I’m telling you to ditch your preconceived notions about your abs: when you really understand how they function, you’ll see why the conventional way of training them doesn’t work.

Unfortunately, this belief doesn’t reflect the true function of the abs or the core, which is to stabilize.

You see, your “abs” consist of much more than just your six-pack. In fact, your abdominals should be viewed more globally, to include your entire core region: extending from just below your chest all the way down and around to your glutes.

This corset of muscle not only gives people a defined, tight core, but also stabilizes the spine and disks, protecting them from unnatural bending or twisting.

See why getting a toned, sleek belly involves much more than just working the muscles in the front of your stomach?

To truly tighten up this area, you need to be working the entire core, which includes the deep inner muscles hiding beneath your abs, your obliques, your low back, and upper glute area.

When you do this, you’ll notice that your entire trunk region will become tighter – not just the front region of your abdominals.

So how can you even work all of these muscles if “standard” ab exercises aren’t enough? While I have a whole collection of my favorite ab exercises (you can see them all in this post), right now I want to focus on one of the absolute best core exercises – the Pallof press.

It Works the Core of Your Core

The beauty of the Pallof press is that it challenges and strengthens the stabilization action of your abs. That’s because when you do this exercise, it forces your core to resist the rotation or compression of your spine, which forces your entire core to engage.

This not only helps you build a sleeker core because you’re working it from every angle, but also leads to greater balance and a strong center of power for any type of movement you do on a daily basis.

Want to spend a few hours moving furniture or gardening without worrying about injuring your lower back (plus have a taut tummy to boot)? Spend some time doing the Pallof press.

How It Helps Your Spine

Now that we’re on the subject of back pain and injuries, it’s worth mentioning that the Pallof is superb for preventing and even relieving low-back pain.

The anti-rotation action of the Pallof essentially prevents the spine from being thrown out of its safe position through unnatural twists and bends.

For instance, if you slip or stumble, a strong core will prevent your spine from taking on all of the force and damaging a disk.

The abdominal muscles literally act like body armor for your spine.

This is also the reason crunches and similar movements are terrible for the spine and low back pain. Instead of stabilizing the spine, they actually compress the disks by forcing the spine to bend in an unnatural way.

Before we get started with the Pallof, keep in mind that the more narrow your stance is, the harder the Pallof Press will be. So, if you find yourself struggling with balance at first (and you’re not using too much weight), try widening your stance slightly.

Also, be sure to run through a mental checklist as you set yourself up to do the Pallof Press, avoiding these common mistakes:

And now, without further ado, let’s get to shredding that core!

The cable Pallof press is the standard version of the Pallof. As far as weight goes, you don’t want to use too much, especially if you’re new to anti-rotation exercises.

Aim for a weight that makes it semi-difficult to stay standing straight, but not so difficult that you’re leaning and shaking to remain stable.

The key here is to focus on bracing your entire core to resist the pull of the cable. Don’t lean to the side or let the cable jerk your arms across your body. Go slow, go controlled.

As if the standard Pallof press’ ab-sculpting powers weren’t enough, it has numerous variations that make it easier, harder, and also that target different parts of your core.

For instance, the vertical Pallof will shift the focus to the front of your core by resisting extension, while the lateral Pallof will further engage those side-sculpting obliques.

This version of the Pallof (as opposed to the tall kneeling version) increases the level of instability, since your stance is staggered. This ups your core engagement and makes maintaining your balance more difficult.

The lateral press is similar to the half-kneeling press in that you’re creating more instability for your core by kneeling in a split stance. However, by raising your hands overhead, you also engage more of your lower abdominals and also get in some shoulder engagement.

The split-stance Pallof seriously challenges your center of balance, requiring the obliques to be fully engaged to keep you upright in your wide stance.

The tall kneeling Pallof (as opposed to the half-kneeling Pallof) requires more oblique engagement to hold you upright, since you’re taking a lot of leg stability out of the equation.

If you’re unable to get to the nearest gym or cable machine, or are just looking for a way to progress into the Pallof, try out these alternatives below.

Don’t have access to a gym or cable machine? No worries. The Pallof Press can be done at home with an exercise band and something sturdy to attach it to. 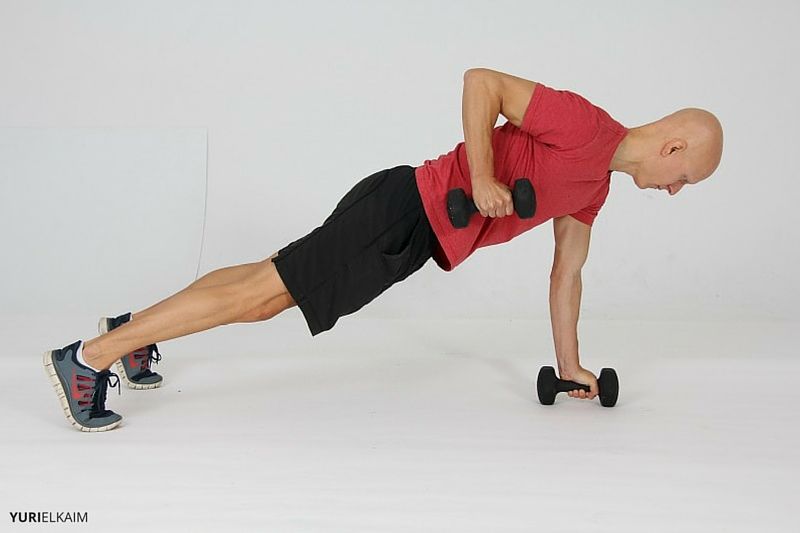 While the Renegade Row looks nothing like the Pallof, the way it engages the core is similar.

Both the Renegade and Pallof are anti-rotational exercises that require bracing of your abdominals as you pull weight in an unstable stance. This requires deep engagement of your oblique stabilizers to avoid falling or rotating to one side.

This is a great Pallof press progression, as it teaches your core how to start resisting rotation during everyday movement; in this case, the lunge.

These banded squats are another great way to progress to the Pallof. They work in a similar fashion as the anti-rotation lunges, training your core to handle anti-rotational resistance.

Tight Abs From Just One Move

The number of ways you can vary and modify the Pallof press are another amazing benefit of this exercise – not to mention the fact that you only need a band and a sturdy object to do it.

Once you start incorporating the Pallof into your weekly core routine, you might also notice balance and stability improvements during other exercises, like walking lunges, due to your increased core strength.

Enjoy it, along with that newly defined core!

In my Abs Secret Blueprint, I’ll help you find the keys to finally carve out those tight, hard midsection.