How Long Does It Take to Get Abs? | Yuri Elkaim

How Long Does It Take to Get Abs?

By far, one of the top goals people set for themselves when they first start working out is to sculpt an incredible set of abs.

So it’s not surprising that I often am asked this question: “How long does it take to get abs?”

As it turns out this is actually a tough question to answer. Not because getting a six-pack is necessarily a hard thing to do, but because there are many factors impacting how long it might take.

Let’s get into some of those details to try to puzzle out the answer.

You Already Have Abs 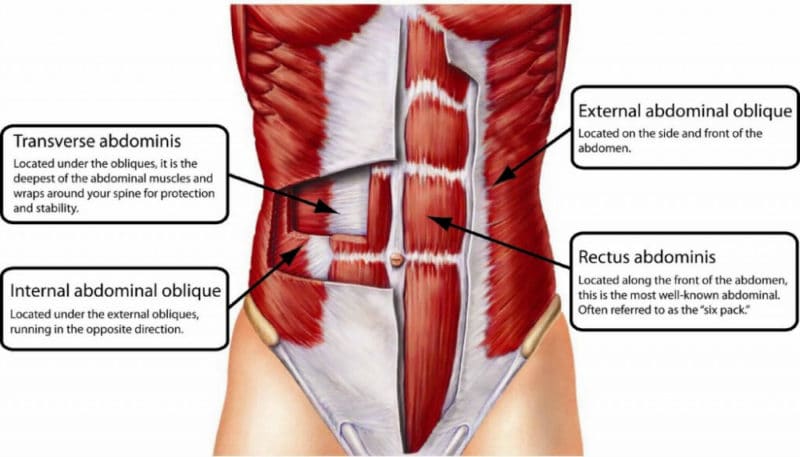 Here’s something to consider before we begin: you already have abs. Everybody does.

Your abs are simply a group of muscles in your stomach area that works to keep you upright and allows your torso to bend, twist and move relatively freely.

When people talk about the mythic six-pack, though, they’re usually referring to the largest muscle of the bunch: the rectus abdominus (1).

Stretching from your lower ribs to the upper ridges of your pelvic bone, the rectus abdominus is checkered by a unique group of tendons which give the muscles their distinctive “six-pack” shape.

There are smaller muscles around your core that you might associate with visible abs, including the obliques and the transverse abdominus.

Why does any of this matter? It’s important to understand that those muscles are already there – they’re just hidden by a layer of fat.

That fat rests between the skin and muscles, protecting them but also hiding them. In order to have six-pack abs, then, you need to remove enough fat for the muscles to show.

Generally men won’t start to see their abs until their body fat drops below about 10 percent. Women will usually have visible abs once they get below 20 percent body fat.

The real question, then, should be:

“How long does it take to lose body fat?” 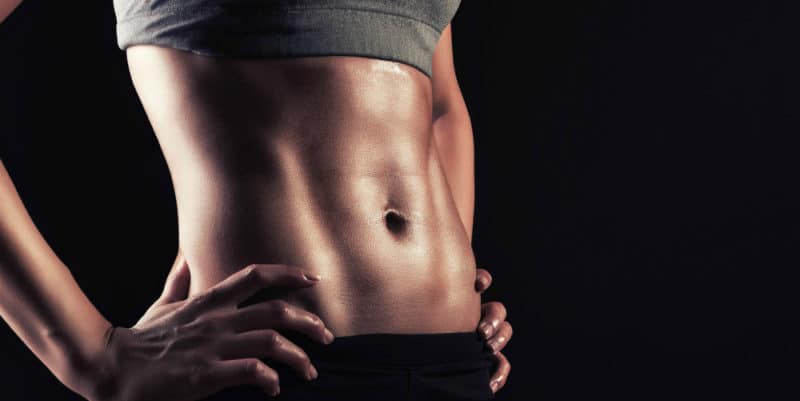 This is where things get complicated. Depending on numerous factors, everyone loses weight – or fat – at different rates.

Based largely on your genetics, you may fall into one of three basic body types: ectomorph, mesomorph or endomorph.(2)

Ectomorphs are naturally slender and may have difficulty gaining weight while endomorphs gain weight easily and tend to carry more body fat. Falling in the middle, mesomorphs are athletic and can usually modify their weight without much effort.

It’s important to point out that very few people fall into only one of these classes. You are most likely a mixture of all three, with tendencies toward one. In fact, most of us are a balance of all three groups.

Your genetics, though, affect more than just your overall body shape.

They can also impact the way that your body stores fat and even where it chooses to do so. Depending on these tendencies, you may lose weight in your arms, legs and other areas long before your body decides to tap into the reserves around your stomach.

Which could mean your precious six-pack is the last thing you see.

But it’s not hopeless. Trust me.

Your Lifestyle and Your Genes

Now that we’ve established that your genes play a role in your body type and how much fat you have, let’s get specific. The particular gene in question – discovered relatively recently in 2007 – is called the adipose gene (3).

This aptly named gene dictates how many fat cells your body has and where they will be distributed. By the time you’re done with puberty, this gene has largely done its work and you have all the fat your body is going to have.

Or at least that’s how it’s supposed to work.

Recent research has shown that our lifestyle and environment can have a massive impact on how our genes express themselves. In the case of the adipose gene, your diet and overall activity can either increase or decrease the amount of fat cells in your body (4).

This is notable because it warns us that poor diet and relative inactivity can make your body a very fat-friendly place, packing on more than your genes had originally intended.

Likewise, we also now know that you can change the expression of your genes and lower the amount of fat that your body contains through lifestyle adjustments.

Your diet and overall lifestyle, then, are important considerations in answering the question, “How long does it take to get abs?” 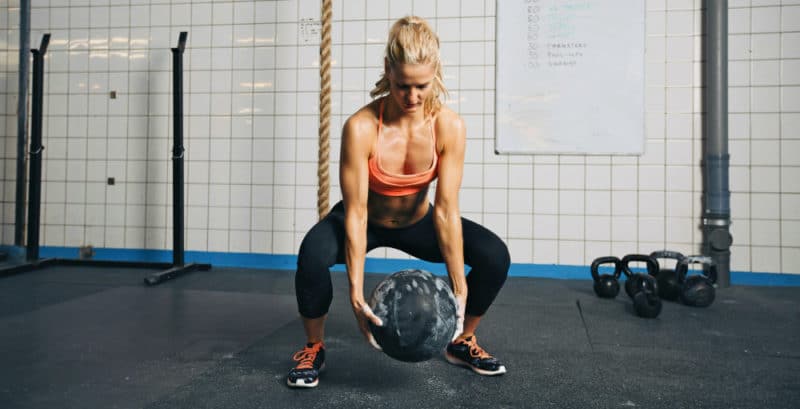 Now let’s focus specifically on the “exercise” aspect of your overall routine.

Way too often, people fall into the trap of cranking out tons of crunches or planking for hours at a time when they decide to chase down the elusive six-pack. This does not work.

Yes, your muscles need to be adequately developed for them to be visible once the fat goes away but those crunches aren’t going to do much in helping you lose fat.

Instead of burning fat for fuel from the stores that surround the working muscle, your body takes it from wherever it wants, generally balancing the weight loss across your entire frame.

To effectively carve out those abs you need to build a workout routine that burns body fat efficiently. Isolation exercises like crunches don’t do a great job of that because the muscles in your abs are small.

Why does that matter?

Because the amount of calories an exercise burns is a direct result of how many muscle fibers are activated. The bigger the muscle you work, the more fat you can expect to burn.

[Related: The 19 Best Glute Exercises of All Time]

Which exercise do you think demands more fuel, a squat or a crunch?

The answer is squats. Because they work some of the biggest muscles in your body, they require more energy than crunches.

Because remember: your body takes fat for fuel from all over. A round of squats, even though it targets your legs, can help reduce the fat covering your core. So can deadlifts, rows, bench presses or any other big compound exercise.

The goal is to select exercises that train big movements and require the coordination of several large muscle groups.

The Right Amount of Exercise 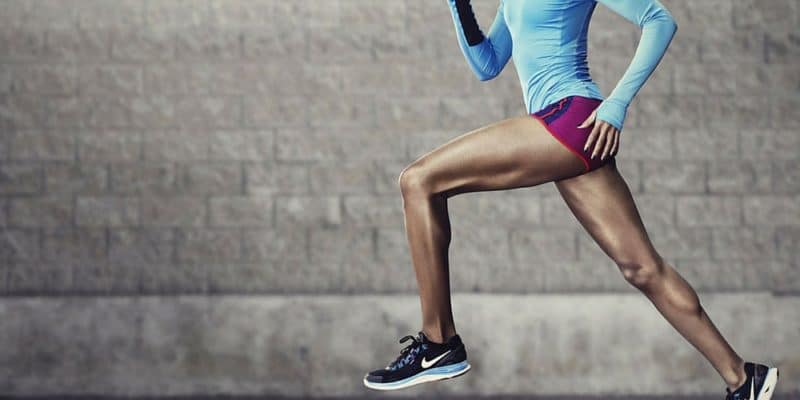 Another thing that happens when people decide to change their body and shred their abs is that they go into overdrive, spending hours on the treadmill or in the gym, dripping with sweat.

Although well intentioned, that approach is not going to work.

For one thing, your body is going to quickly adapt to long cardio sessions, demanding that they get longer and longer to get the same effect.

Also, extremely intense and/or long workouts also cause a massive spike in levels of the stress hormone cortisol (6).

In small doses, cortisol encourages your body to burn fat. But when levels get too high for too long, the opposite happens. And worse, your body not only starts to store body fat, it also starts to break down muscle.

This second effect of cortisol is particularly worrying here. Decreased muscle can affect you in plenty of ways, weakening you and leaving you more vulnerable to general injuries. But it also dramatically slows down your metabolism.

Even when you’re at rest, each pound of muscle that you’ve built burns calories. Maintaining active, healthy muscle will let you burn fat even when you aren’t exercising.

And, if you work out correctly, your metabolism will stay in overdrive for hours – or even days – after you leave the gym.

Short, intense workouts with an emphasis on strength and power send your body into a state called Excess Post-Exercise Oxygen Consumption (EPOC). Both during and after exercise, your muscles need oxygen to create fuel and recover from the stress you just put them through.

Interestingly, each liter of oxygen that your body uses requires about 5 calories to be burned. That means that well after your workout is over, your muscles burn more calories than they normally would just because they’re trying to recover.

But this only happens if you design your workouts well.

[Related: How to Do Interval Training… The Right Way]

So you can see that spending hours and hours in the gym every day won’t do you any favors when trying to build your six-pack.

How Long Does It Take to Get Abs?

We’re back to the question, “How long does it take to get abs?”

And of course, your starting point will determine just how much fat you need to lose before your abs show themselves to the world.

The best advice is to eat a healthy diet with the right amount of food, train smart and at the right intensity, and be patient. Your abs will make an appearance in due time.

Did you enjoy this article on How Long It Takes to Get Abs?

If so, and you’re eager to take your abs and core to the next level, grab my FREE report called The Flat Stomach Secret. It’s packed with 7 unknown ways to lose belly fat and get amazing abs.