What You Should Know About Losing Weight with Cold Thermogenesis 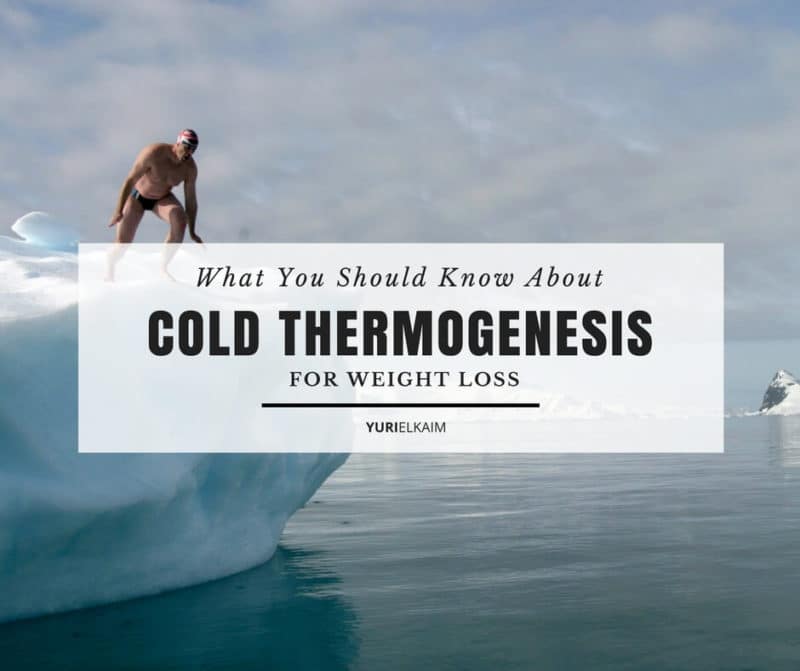 Every year when the temperatures plunge, crowds of people in so-called “Polar Bear clubs” dive into icy oceans, lakes, or rivers.

Sometimes it’s to raise money for charities, other times it’s just to make a splash and check it off a bucket list.

And even though many shudder at the thought of voluntarily taking a dip into freezing water, there are actually health benefits to cold exposure. Also known as cold thermogenesis, the practice of exposing yourself to cold temperatures can actually help you lose weight, increase your metabolism, and burn fat even quicker.

Before we get into how exactly cold thermogenesis works, let’s start with the very basics.

You Need This Uncommon Fat

Our body has two different types of fat. The first kind is called white fat, and it’s what you might traditionally think of when you think of fat; this is the type of fat that most of us have plenty of.

The second type is known as brown fat due to its darker color and it’s a much more metabolically active that may actually come with some health benefits. 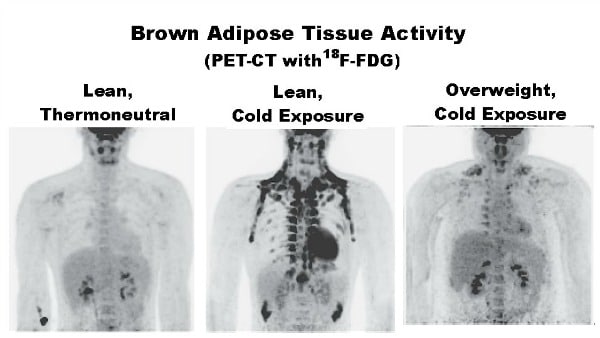 It sounds a little counterintuitive to think that any type of fat could actually be healthy or “good for you,” but it’s true. Brown fat may actually play an important part in keeping trim and maintaining a healthy weight.

In fact, people who fall into the healthy-weight category might have a small amount of brown fat, but those who are overweight or obese actually have even less.

Besides cold thermogenesis weight loss, you can also expect to see a whole host of health benefits when you take the (literal) plunge into the cold. Let’s dive in.

1) It can help protect against disease.

When your body is exposed to the cold, it can actually boost your production of health-promoting antioxidants.

One study actually looked at subjects who swam regularly in ice-cold water in the winter. Following their chilly swim, they found that there was a jump in their levels of the antioxidant glutathione (1).

This is important because antioxidants protect you from free radicals and disease. An increase in antioxidants can better arm you to fight off disease and prevent the development of diseases like cancer.

As I mentioned earlier, cold thermogenesis works by increasing levels of brown fat. Interestingly enough, mounting evidence is suggesting that having a higher ratio of brown fat can actually improve sensitivity to insulin (2).

Insulin sensitivity is important because insulin is the hormone responsible for transporting glucose from the blood to the cells where it can be used for energy. When our body stops responding to insulin the way it should is when we run into all sorts of problems like diabetes.

A higher ratio of brown fat  can eliminate this problem altogether.

When you’re exposed to prolonged cold temperatures, your body starts to adapt by adjusting the production of several hormones that have a role in controlling our metabolism.

Epinephrine and norepinephrine, for example, are two hormones that promote the production of heat when you’re exposed to the cold. They’re responsible for triggering mechanisms that increase your calorie expenditure, like shivering (3).

Thyroxine, a thyroid hormone, is also increased following cold exposure. This hormone plays a role in increasing our resting metabolism, allowing the body to burn more calories without any extra effort (4).

So how do you go about jumpstarting your metabolism, increasing your antioxidant levels, and improving your insulin sensitivity through cold thermogenesis?

There are several different ways to put cold thermogenesis into practice, and they don’t all require shivering through an ice bath or diving into icy water in the middle of winter.

Here are a few simple tips for reaping the benefits of cold thermogenesis.

1. Start your morning with a cold shower.

I mentioned earlier how there are people who willingly jump into freezing cold oceans and lakes in the middle of winter for the sake of tradition, charity, … or possibly psychosis.

All kidding aside, there are a lot of people who think that this is the very definition of cold thermogenesis and that it requires you to endure submerging yourself into freezing water to get the benefits.

While exposing yourself to icy cold water is probably the fastest and easiest way to reduce your body temperature, it’s not the only way. And if you do choose to go the water route, you don’t need to join a Polar Bear club or map out the route to the nearest ocean to do it.

Instead, you can get all the benefits of cold thermogenesis just by starting your morning with a refreshing cold shower. I recommend starting your shower off at a normal temperature and then finishing with 5 to 10 minutes of cold water to bring down your body temperature.

It’s quick, effective, and so much easier (and less painful) than subjecting yourself to an ice bath.

2. Spend a little time outside. 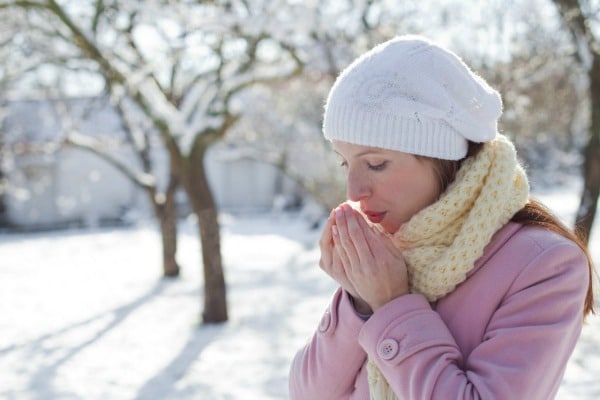 This trick might not work when it’s 70 degrees outside, but during the winter, standing outside for a few minutes can be just as effective at getting in a little cold exposure.

Spending as little as 10 minutes outside when the temperatures are low can help you achieve cold thermogenesis and get your day off to the right start.

Try squeezing in a quick yoga session outside after you get up or relax with a book or some good music for a few minutes in the morning.

It’s a free, effective, and extremely easy way to take advantage of cold thermogenesis without going any further than your own backyard.

3. Turn up the air conditioning. 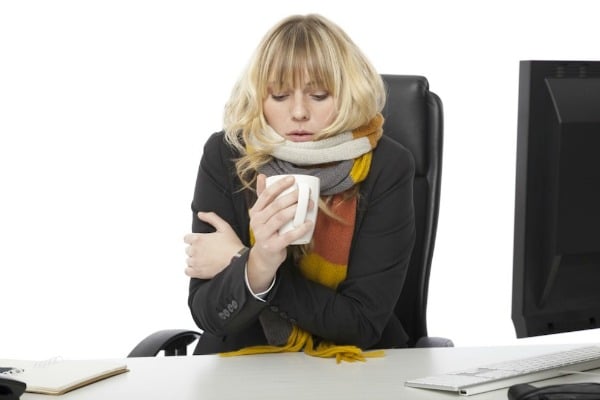 If standing outside doesn’t sound all that appealing to you, good news! You can get the same effects of cold thermogenesis from air conditioning.

In fact, there are a good amount of studies that look at the effects of sitting in a cold room on fat burning and have found promising results.

One study had participants sit in a cold room at 4 degrees Celsius (39 degrees Fahrenheit) for 30 minutes and found that they had increased levels of fat-burning, plus a boost in metabolism. But rather than affecting levels of fat-burning hormones like thyroxin, epinephrine, or norepinephrine, it was actually the increase in movement from shivering that really kicked up their metabolism (5).

So, here’s an excuse to go to an A/C-cooled movie theater or take an extra-extra-long stroll through the freezer section of your favorite wholesale club.  Although this might not necessarily result in an increase in brown fat, it is a quick and easy way to bump up fat burning.

4. Embrace the cold – while you sleep. 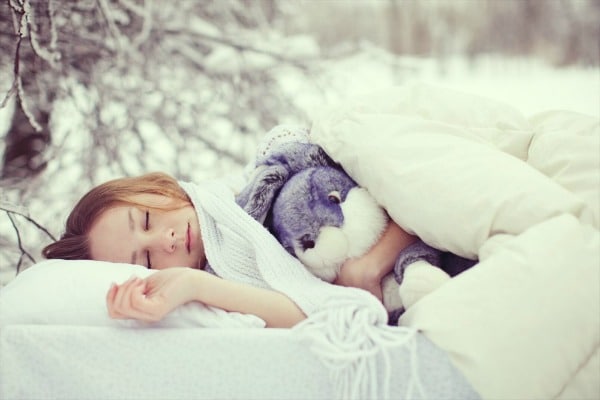 Not so crazy about the idea of jumping into cold water or spending your day shivering? You’re in luck, because the easiest way to spur cold thermogenesis can be done all while you get some shut eye.

Studies have shown that you can increase your levels of brown fat all from the comfort of your own bed. In one study, they showed that subjects sleeping in cooler temperatures (19 degrees C or 66 degrees F) had a 42 percent increase in brown fat plus a 10 percent increase in fat metabolic activity after just one month (6).

Turning down the temperature while you sleep requires minimal effort on your part and can have some serious beneficial effects. Kick up the A/C, put the blankets aside, and enjoy the fat-busting benefits of cold thermogenesis all while you peacefully sleep.

Cold thermogenesis is an awesome tool for speeding up metabolism and increasing levels of beneficial brown fat, but let’s be clear: more is not better.

Although it comes with an extensive list of benefits when it’s done properly, if it’s done wrong, it can actually have some serious health consequences.

It can increase blood pressure by constricting vessels to conserve heat and can have a serious impact on the function of the sympathetic nervous system. In this case, overdoing is can definitely cause the risks to outweigh the benefits.

Get a Little Cold – in Moderation

Pick one or two cold thermogenesis methods and add them into your routine — in moderation. Stick to 5 to 10 minutes at a time when it comes to cold showers or baths and limit your time out in the cold to 10 minutes once or twice a day.

Most importantly, practice cold thermogenesis in conjunction with other healthy behaviors.

Just because it can help you increase your fat burning doesn’t mean you should drop your exercise regimen or stop following a healthy diet altogether. Instead, use it to supplement the healthy habits you’ve already created to lead an overall healthy lifestyle.

Try this workout, which will rev up your metabolism for hours after you’re done sweating.

This quick interval workout will help you get a fitter, slimmer body fast by harnessing the power of the “afterburn.” And it’s yours for FREE!

You can download the Fat Blaster Workout right now by clicking the banner below.

Metabolic Circuit Training: This Is How to Lose Weight Fast

The Bad Habits List: 7 to Give up Before You’re 50