After her last break-up, Stine could hardly find the motivation to stand up for more than five minutes, far less exercise.

“It was so bad I could barely string a sentence together,” recalls Stine.

She knew the relationship was doomed from the very start, yet she could never bring herself to fully end it. It ended up lasting 14 years, during which time she put on more weight than she ever had in her life.

Now, it was over, but she couldn’t find it within herself to take the next step. She was stuck in emotional limbo.

After five months of sickness and depression, Stine decided to make a change. She had actually studied to be a nutritionist years before, but the turmoil she had sunken into left her professionally adrift. Now, she wanted to get back on track by ditching gluten and dairy, and by completely revolutionizing her diet.

That’s when she came across The All-Day Fat Burning Diet.

Stine was thrilled at how easy it was to prepare the meals laid out in the plan. Before, she found it difficult to figure out what to eat, and always ended up reaching for something she knew she shouldn’t touch. Now, healthy eating was easy.

“The food is fantastic and I haven’t felt like I was on a diet at all,” wrote Stine after a few weeks on the program. “I have cooked the food for guests several times and it has always been well recieved; even my four-year-old son is happily eating the food!” 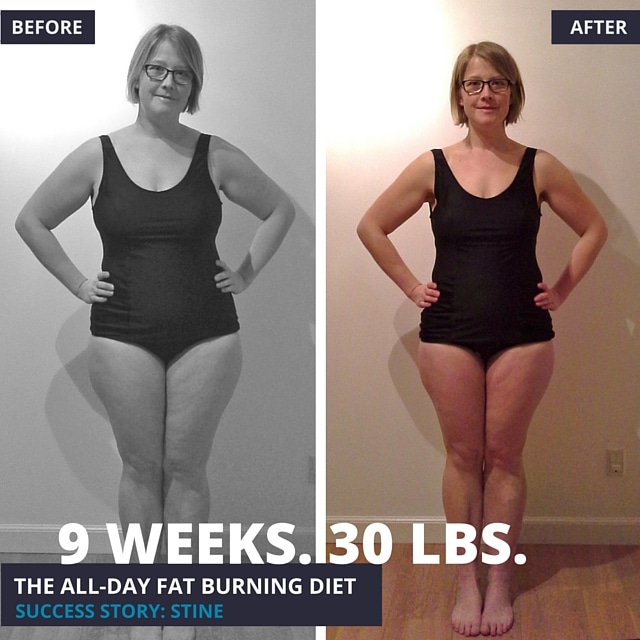 Over the course of her relationship, Stine had developed an unshakeable addiction to sugar and wheat, but the more she exercised and stuck to the eating plan, the more those cravings fell away.

She simply couldn’t believe what was happening to her!

Soon, there was no denying that she was a changed woman: within nine weeks, Stine had dropped 30 pounds!

What’s more, she felt better about herself than she had in years. It was time to truly live again.

“I have reopened the lines of communication with my body and feel ready to move on with my life,” Stine wrote at the end of our time working together. “After nine weeks on the diet, I can’t see myself ever ending it.”

We put on weight for all kinds of reasons, that’s why it’s important to work with a fitness plan that addresses everything that affects you—from the first thing you eat in the morning to the last thing you think about before bed. The All-Day Fat-Burning Diet addresses all of these areas.

If, like Stine, you’re looking to evolve past your sorrows and those annoying extra pounds, pre-order a copy of the book today. Together, we’ll map out a path to a brand new you.