Yuri Elkaim - All-Day Fat Burning Diet: How to Lose 23 Pounds While Deskbound and Stressed Out

You are here: Home / Get Motivated / Y Tribe Transformations / All-Day Fat Burning Diet: How to Lose 23 Pounds While Deskbound and Stressed Out

All-Day Fat Burning Diet: How to Lose 23 Pounds While Deskbound and Stressed Out

Fasting is one of the world’s oldest traditions, but for most people, the mere thought of it is terrifying. After all, how can you skip even a single meal without feeling absolutely wretched?

This isn’t the case for a recent client of mine named Sebastian. In fact, he credits the fasting approach in my upcoming book The All-Day Fat Burning Diet as the very thing which helped him lose a massive amount of weight!

Like many people, Sebastian spends most of his week desk-bound. His job is intense and taxing, and he was the first to admit that food became a way to soothe his stress. Every afternoon, without fail, he’d find himself at the snack machine, aching for a sweet or salty fix.

He was, in fact, the perfect example of an emotional eater.

Fed up, Sebastian enlisted the support of his wife and together they decided to give The All-Day Fat Burning Diet a try.

The first thing that struck Sebastian was how tasty the meals were. He’d tried other diets in the past, but nothing was as satisfying as this. Rather than depriving himself, he was feasting on delicious smoothies, fish he hadn’t eaten in years, and he even found a new favorite: my tasty Southwestern Chicken Salad, chock-full of juicy slices of spicy seared chicken and mango.

The joy Sebastian found from “dieting” was certainly a surprise, but nothing could prepare him for his next revelation: that it was remarkably easy to go without food.

The Freedom of Fasting 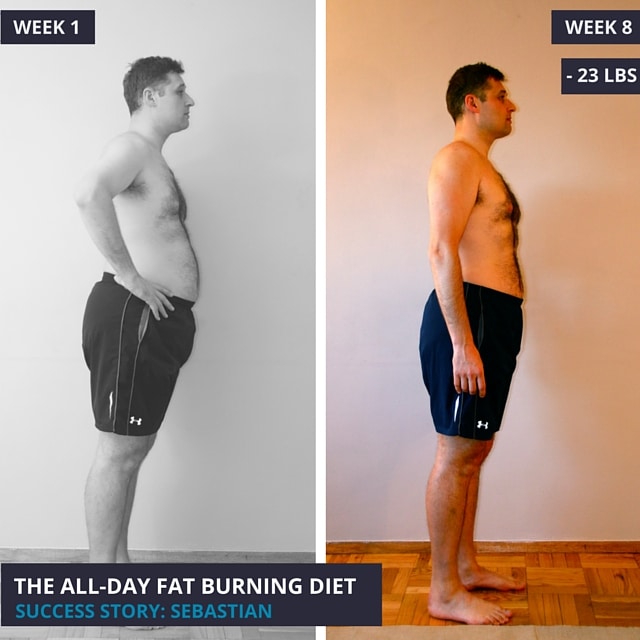 One of the ideas that the The All-Day Energy Diet is built around is that we often don’t need as much food as we think we do. Furthermore, we really don’t want half the crap we eat either.

Half the time, we only eat because the clock tells us to, and what’s more, we often gorge ourselves on unhealthy food we’ve been conditioned to crave. Follow the plan’s easy guidelines and you’ll never overeat, and you’ll even develop cravings for healthy foods.

One of the mechanisms we use to get you back on the right track is a fast day. That’s right—a whole day without eating.

I know it sounds daunting. It certainly did to Sebastian. However, after trying it once or twice, he was hooked.

“The fast day has dramatically changed my approach to food in general” said Sebastian when reflecting on his experiences with The All-Day Fat Burning Diet.

“I never imagined I could stay without eating for up to 20 hours! At the office I would always get cravings or feel hungry. The fast has taught me that my body feels better and energized by fasting and that my mind can easily not think about food for a while. Moreover, when breaking fast, I also profoundly realized that my body wants fresh food (salad, greens, fruit, berries) and is not attracted to greasy or sweet stuff. And that first food tastes so good!”

You’d think fasting would be a trial, but as Sebastian proved, it really wasn’t. Best of all, it was even more effective than he thought it would be—after two months following the plan, he’d lost 23 pounds!

“This is the only program I’ve ever done that I know I can keep doing for a very long time, knowing that it will keep producing results and reinforcing my health,” said Sebastian. “Every day, I feel stronger and energized to go through the day as a husband and parent and I feel more focused and confident at work.”

Don’t you want these kinds of changes for yourself? In fact, I don’t even have to ask that question. Pre-order a copy of The All-Day Energy Diet and you will have taken the first step towards the healthiest “you” in years!