The Truth About Grains and Your Brain | Yuri Elkaim

The Truth About Grains and Your Brain

A few years ago, gluten-free eating was virtually unheard of. Initially written off as a “special diet” for those with celiac disease and gluten-sensitivity,  you had to hit a specialty health store to find non-gluten baking options. Type 2 diabetes, increased belly fat and many other digestive and blood-sugar issues. In the last 10 years, gluten-free eating has exploded. Now a market which claims more than 44 million eaters, estimated to be worth $10.5 billion in 2013 sales, and expected to rise to $15.6 billion in sales by 2016.

What’s the deal with this massive growth? How did gluten-free eating become a mainstream focus for most eaters?

In the last 100 years, a variety of books and journals have been published, linking some of our most chronic ailments to our gut. What goes in our gut goes into our bloodstream, and multiple studies are now confirming that the North American recommended focus on grains as the “base” of the food pyramid isn’t just correct–it’s causing chronic illness. One of the most recent books to explain the deleterious effects of grain on the body is “Grain Brain””–written by neurologist Dr. David Perlmutter.  Though his bestselling book was published in 2013, respected physicians and researchers, such as Dr. Mark Hyman, have been talking about the effects of grains on brain health for years. 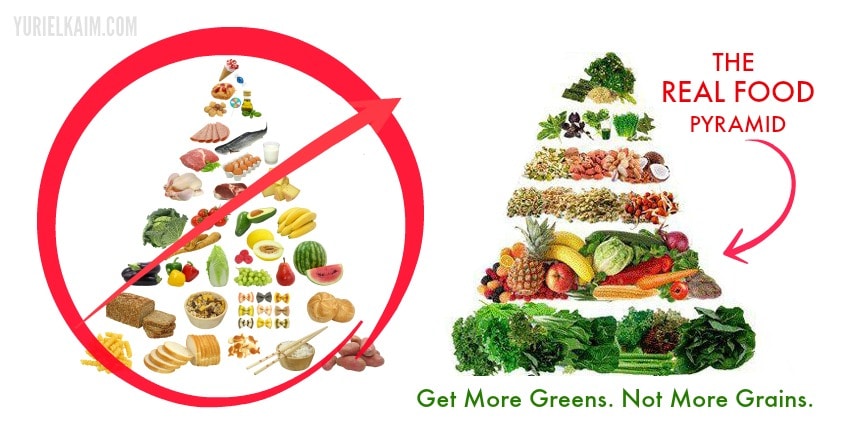 How Grains Affect Your Brain

Numerous studies have linked both high blood sugar and inflammation to degenerative disorders of the brain, such as Alzheimer’s, dementia and Parkinson’s disease. Even depression and ADD have been connected to high-blood sugar.

What Dr. Perlmutter describes “Grain Brain” as the whole range of effects that eating wheat and gluten have on inflammation and high blood sugar, which then result in these diseases and disorders. But Perlmutter’s not the only one who’s made these connections.

The Mayo Clinic recently published a study that showed that people eating a low carb/high fat diet actually had 65% lower risk of developing dementia. Researchers attribute this truly remarkable difference to the reduction in blood sugar levels, since high blood sugar has been definitively linked to a greater risk of dementia and Alzheimer’s.

The reason for this is that when blood sugar is elevated, it actually changes proteins in the brain, creating free radicals as a by-product of the process. This, in turn, also creates inflammation in the brain, because it inhibits the chemical mediators in the brain that prevent or reduce it.

Recent research has shown that everyone has at least some digestive or inflammatory response to eating gluten, even if they haven’t been diagnosed with gluten sensitivity or Celiac. You can read more about why gluten has become such a problem in this post, but the nutshell version is that today’s wheat is so much higher in gluten than it was fifty years ago that our systems simply can’t handle it.

The most recent studies show that we all respond to eating gluten in such a way that the walls of the small intestine, where nutrients are absorbed and passed into the bloodstream, actually become too permeable. This is what is meant by “leaky gut” and this leaky gut allows proteins into our bloodstream that really aren’t supposed to be there. This includes other proteins found in gluten, such as gliadin, which binds to the opiate receptors in the brain and actually creates an addiction to wheat.

These unwelcome proteins tax the immune system, causing systemic and brain inflammation, which then contribute to Alzheimer’s, dementia and other degenerative conditions of the brain.

How to Know if Grains Are Hurting Your Brain

There is no test available specifically to identify whether gluten or grains have effected your brain health. However, those diagnosed with cognitive impairments, ADD, depression, early-onset Alzheimer’s, high blood sugar, pre-diabetes, irritable bowel syndrome and even autism have been helped by cutting wheat, sugar and gluten from the diet, thus reducing their blood sugar levels and inflammation. So it would make sense for those people to eliminate wheat and gluten from the diet.

A better question may be, “Why would I want to eat foods known to cause cognitive degeneration, Type 2 diabetes, heart disease and other serious health issues?” 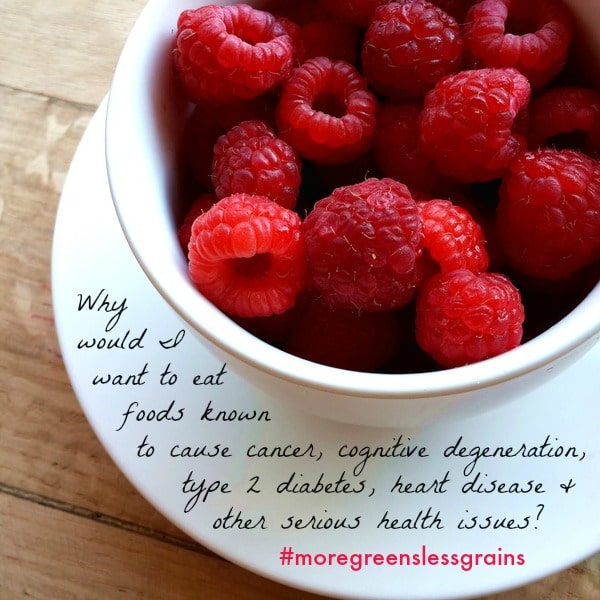 Can You Reverse the Damage?

This question has a more satisfying answer, because reversing the effects of gluten, wheat and sugar on the brain is actually possible and even very likely.

What Dr. Perlmutter’s results with his own patients indicates is a diet that is “a diet that’s aggressively low in carbohydrates with an abundance of healthful fat, and this is the central theme of Grain Brain. I choose to focus on eating above-ground colorful vegetables, wild fish, nuts, seeds, free-range eggs, occasional grass-fed red meat, and an abundance of fat from foods like olive oil, avocados, and coconut oil.”

This lines right up with what I’ve been recommending through my holistic nutritional counseling. I highly reccomend a naturally gluten-free diet, real foods, plenty of raw veggies and low-glycemic fruit. You can sum up my approach to ultimate health with four simple words– More greens, less grains.

Essentially, by removing glutenous grains, refined carbs, and excess sugar, while focusing on healthy proteins (a.k.a wild-caught seafood and grass-fed, pasture-raised meats and eggs), healthy saturated fats (from coconut oil, olive oil, nuts and seeds, and getting your carbs from low-glycemic vegetables and fruits, it’s possible to rid your body and your brain of the effects of Grain Brain.

Don’t Worry – It’s not as painful as you might think.

You may be gasping at the idea of cutting sugar and flour, but it’s easier than you think. If you read my post on How to Sugar Detox, you’ll see that the addiction to flour and sugar can be broken completely within 7-14 weeks. Within two weeks, you’ll also start seeing a significant reduction in inflammation, renewed energy, better mental focus, better moods, fewer headaches, keener focus, reduced depression, fewer ADD symptoms and, as a bonus, fat loss.

The first three days of withdrawal from sugar and wheat are the hardest, but it then becomes dramatically easier and most people are completely free from cravings and withdrawal symptoms well before the two weeks are up.

It’s very important that you not try to count calories or portion your meals while you’re cleaning your brain and your body of the dependency on wheat and sugar. Your body is telling you that it needs protein and healthy fats, so obey it. Healing your body requires working with it to do what it has been designed to do.

I and Dr. Perlmutter both recommend that you incorporate exercise into your daily life if you’re not already getting at least three workouts in per week. Both cardio exercise and strength training help to reduce blood sugar levels and release endorphins into your bloodstream.

Endorphins are feel-good hormones that will replace some of the opiate effects of the gliadin in wheat, helping to elevate your mood and reduce cravings for flour and sugar. Exercise also gives you something to do besides walking into the kitchen or to the vending machines when the cravings hit.

Listen, the evidence against including grains in your diet is enormous and this is why the Paleo diet and books like “Wheat Belly” and “Grain Brain” have gotten so much respect from the medical and nutritional science communities. If you only do one or two things to change your health in the next thirty days, getting rid of grains should be one of them.

I promise that the improved cognition, energy, moods and rest, coupled with the reduction of brain fog, fatigue, abdominal fat and inflammation, will more than make up for those Ring-Dings and bagels you’re not eating.

No More Gluten- How to Go Grain Free

If you’re wondering how to go gluten-free, I’ve got a couple of powerful resources that really work. Here are three simple ways to go Grain Free.

Print Recipe
Guilt-Free Super Bread
This wonderfully moist bread goes well with a good slab of butter or as a base for your favorite healthy sandwich. Now you can have your bread…and eat it too without feeling guilty. 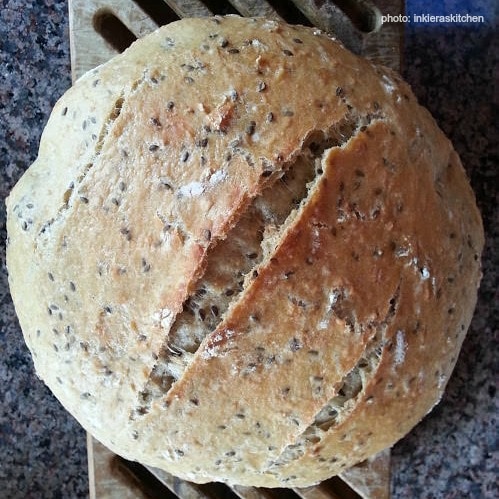 STORAGE: When completely cool, store in an airtight container.
FOR A BIGGER LOAF: To create a 9 x 5 loaf, double the recipe and bake until bread is firm to the touch and a toothpick comes out clean, about 60 minutes.

The 8 Worst Breakfast Foods to Eat in the Morning

Gluten and Joint Pain: Is Gluten Making You Sore?